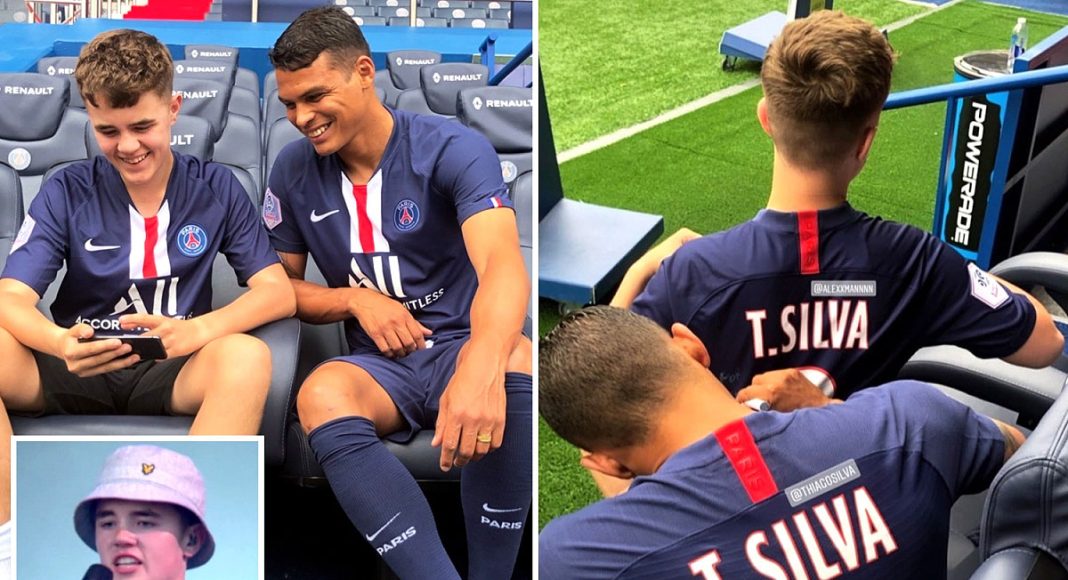 It’s been a whirlwind of a day for Chelsea fans when it comes to transfer news.

First of all there has been real progression with the Kai Havertz deal, that being right on the brink now.

As well as that, we have got the ‘here we go’ from Fabrizio Romano regarding former PSG defender Thiago Silva joining Chelsea on a free transfer.

Cast your minds back to Glastonbury Festival 2019, rapper ‘Dave’ asked for some help on stage to perform his hit song ‘Thiago Silva’

Up stepped young reveller Alex Mann to absolutely kill it, becoming a cult hero over night!

BBC One on Twitter: "Get this kid a record deal! When diehard fan Alex was bought out of the #Glastonbury2019 crowd to rap, he nailed EVERY word! 🔥🔥🔥 #Glastonbury pic.twitter.com/3AgXQQdkyA" https://t.co/XIFxiTlERD

Alex sporting a PSG Thiago Silva shirt, joined Dave on stage and continued to rap the whole song with him.

He became an internet sensation and has even recorded his own rap tune off the back of his new found fame.

Now over a year later, we caught up with Alex, who has been a massive Chelsea fan for his whole life, with Chelsea on the brink of signing Thiago Silva!

TC – Let’s start with the Glastonbury appearance – what was going through your head whilst you were on stage rapping with Dave?

AM – “To be honest I just thought that I couldn’t embarrass myself so tried as hard as I could to smash it. It was crazy when I was up there though I couldn’t think of any experience like it.”
TC – Things have blown up for you since then, you’ve made your own song etc, what is next for Alex Mann?
“I’m not sure at the moment. I took a big break from everything after it blew up just to focus on myself instead of all the media attention.”
TC – You’re a massive Chelsea fan, how do you feel they have done this season and how do you see next season going?
“I feel like we’ve probably done as good as we could of done with the squad we had but hope to see us challenging for a lot more next season.”
TC – Are you happy with the signings so far? Who else do you want to see come in?
AM – “Yeah definitely been a 9/10 window so far if we manage to get Havertz , Silva and chilwell. I think all signings have been big improvements on what we have already but I’d like to see a keeper come in for obvious reasons and maybe someone like Declan rice.”
TC – Frank Lampard, is he the man to bring a successful era back the The Bridge? What have you enjoyed about him and where does he need to improve?
“I think he definitely could be but I think it’s best to judge him once he can finally manage players he wants to bring in himself and that will suit his system. I have enjoyed the feel good factor he’s brought back to the bridge which wasn’t there under Sarri however I think he could still improve with his in game management and how he sets up the defence.”
TC – Thiago Silva was the name of the song you rapped with Dave on, Chelsea are now rumoured to be in advanced talks to sign him, how do you feel, you must be BUZZING about this?
“Yeah it would be a great signing for us and would massively improve our defence for the time being so yeah I’m definitely excited.”
TC – After your appearance at Glastonbury, you interacted with Thiago himself a few times on socials, so my question to you is, is Thiago to Chelsea a done deal!?
“If I speak I’m in big trouble!”
TC – Do you get to The Bridge (before Covid) to watch many games?
“Yeah despite the distance I still manage to go to pretty much every game with a few exceptions here and there.”
TC – Have you met any players or staff off the back of your new found fame?
“Well I’ve managed to meet Thiago himself which was great and I’ve been in contact with a few Chelsea players too.” TC – Who is your favourite current Chelsea player (Thiago doesn’t count, yet!)?
“Probably Mason Mount at the moment but I do really like Ziyech too so hopefully he can impress.”
We also asked Alex if Chelsea have asked him to do the Thiago Silva to Chelsea announcement, and he provided no comment….. Make of that as you will!

Tiago Silva is such a great signing for us. A much needed steady centre back in our defence that we can fully trust. The young defenders at the club can also learn lots from him!

Previous articleChelsea transfer predictions – Who’s coming in this window?
Next articleThiago Silva falls into Chelsea’s lap as the Blues fill another space in their puzzle