Thibaut Courtois and Willy Caballero have been preparing for Chelsea’s game against Inter Milan by playing a spot of volleyball.

Using their feet instead of their hands, the four goalkeepers on Chelsea’s tour of Asia were filmed larking about at the club’s training base in Singapore.

Chelsea face Inter Milan on Saturday in Singapore with Antonio Conte’s men hoping to bounce back from their 3-2 defeat to Bayern Munich.

Alvaro Morata will start this one, he is a great talent.Conte was right about him.This team offence is great with young Boga, Praise, when Eden come back this team will be perfect. 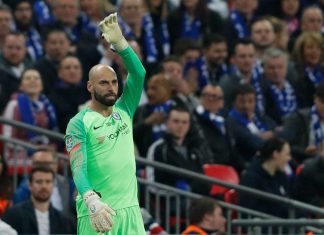