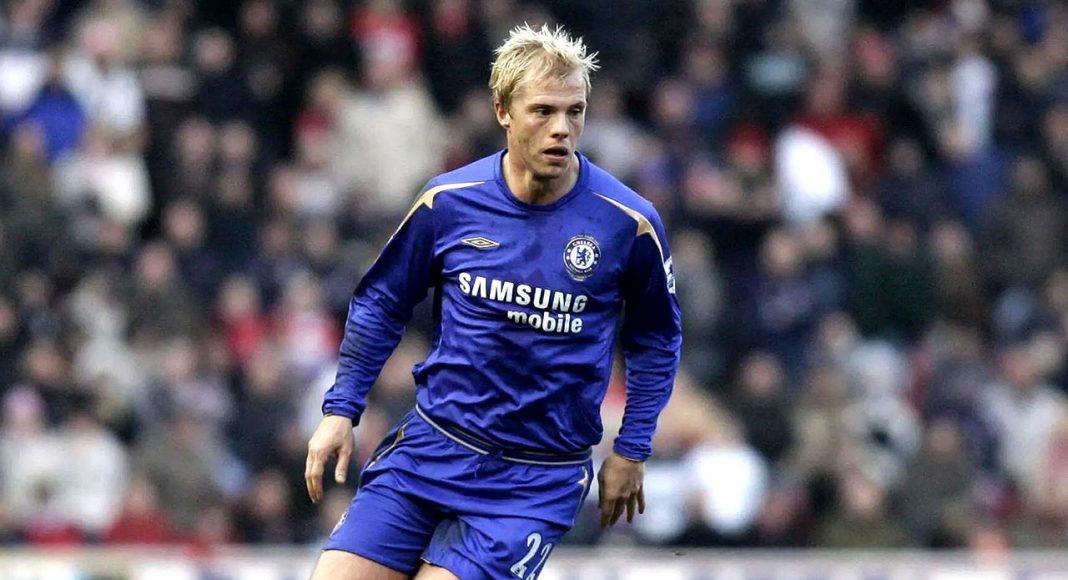 Eidur Gudjohnsen needs no introduction. An immensely popular player for arguably every club he played for, Eidur was as graceful as he was effective.

The Icelandic heart throb lead the line for Chelsea for six years making a total of 186 appearances, and scoring 54 times. At the height of his Chelsea career the Icelander won back to back Premier League titles.

Born in Reykjavik, Iceland, from an early age Gudjohnsen was no stranger to football. Gudjohnsen’s father, Arnór Guðjohnsen played for the Icelandic national side 73 times and was one of the first Icelandic footballers to play in continental Europe; playing for Anderlecht and Bordeaux.

“I didn’t become a footballer because I’m the son of a footballer,” said Gudjohnsen in an interview with FourFourTwo magazine.

“Football is genetic and I was born with football in my blood. I’m told that from the first time I saw a ball, I didn’t see anything else. I knew at the age of three I was going to be a professional footballer. I just knew. It just felt natural to me.”

Gudjohnsen’s professional football career began in his home city of Reykjavik. Playing for Valur, the 16-year-old Gudjohnsen notched up 17 appearances and scored seven goals in his first professional season.

The young Icelander’s talent was obvious, so much so that PSV recruited him in 1995. It was here that Gudjohnsen would play alongside the Brazilian legend, Ronaldo.

“He was 19, only two years older than me,” stated Gudjohnsen.

“But I was a boy and he was already a man. He could do amazing things at full speed – step-overs, twists and turns. The normal players, even the top-quality players, have to slow down to do certain things; he just did it at full speed. He was unstoppable at times.”

Although Gudjohnsen learnt a lot about both football and himself whilst in Eindhoven, a serious ankle injury meant that after only two seasons, he found himself back home playing for KR Reykjavik. But this didn’t last long.

In 1998, Bolton Wanderers, then playing in Division One (equivalent to the Championship now) signed a now 20-year-old Gudjohnsen and it was at Bolton where the Icelander would really begin to show England and the world just how good footballers from Iceland can be.

His first season at the Lancashire club went well but it was in his second season when Gudjohnsen really began to make a name for himself. The 99/00 season witnessed Division One side Bolton reach the semi-finals of both the FA Cup and League Cup as well as the Division One play-offs.

Gudjohnsen scored 21 times in all competitions, unfortunately this wasn’t enough to inspire the Trotters to make a final. But it was enough for Chelsea to come calling.

On 19th June 2000, Gudjohnsen was signed by Chelsea for a fee of £4.5 million – a lot of money for a pre-Roman Abramovich era Chelsea side. His debut game saw him help his new club to victory in the FA Charity Shield Final, beating Manchester United 2:0.

His first season was spent mostly as a substitute but the second season saw the combination of fire and ice as Gudjohnsen formed a deadly strike duo with Jimmy Floyd Hasselbaink.

The partnership of fire and ice provided 52 goals for Chelsea in all competitions in the 2000/01 and although he failed to win a trophy in this period, Gudjohnsen established himself as an important first team player.

Fast forward a few years to 2004 now, under Claudio Ranieri and after the takeover of the club from Roman Abramovich, Chelsea successfully made it all the way to the last four of the Champions League, beating the likes of Lazio, Stuttgart and Arsenal on route before facing surprise French package Monaco. Unfortunately, the match ended in heartache for all associated with Chelsea Football Club.

“We should have made the final,” stated Gudjohnsen.

“We messed it up in Monaco and it was down to tactics. We got it wrong. We were drawing 1-1 away from home with an extra man on the pitch. The substitutions had a big impact and we ended up losing the game.

“We should never have lost. Monaco were a good team, but they weren’t extraordinary. Taking a 3-1 defeat back to Stamford Bridge just proved too much for us.”

The defeat meant that the blonde maestro had lost his fourth semi-final in a row. But the 2004/05 season was to begin a new era for Chelsea Football Club and Gudjohnsen was to become an important part of this era – enter Jose Mourinho.

Gudjohnsen proved to be a loyal and extremely important player for Jose Mourinho in both title winning seasons. Prior to 2005, Chelsea had not won England’s highest division since 1955. Chelsea secured their first title for 50 years in the stadium where Gudjohnsen first became a household name in English football, in the Reebok Arena – the home of Bolton Wanderers.

During Mourinho’s debut season Gudjohnsen played 57 times scoring 16 goals as he formed a strike partnership with one Didier Drogba. The season also saw Gudjohnsen lift the League Cup as they beat Liverpool 3:2 in the final.

Despite these successes, the one downside to the season was of course the defeat to Liverpool in the Champions League semi-final courtesy of the ‘ghost goal’. Some of you may even remember how close Gudjohnsen came to winning the tie and sending Chelsea to the Champions League Final after his shot in the very last seconds of the game went flying past Jerzy Dudek’s far post.

The following season resulted in more Champions League heartbreak for Gudjohnsen and his fellow Blues, however it ended on a high after the club won the Premier League to secure back to back titles.

After six seasons at Chelsea, the Summer of 2006 brought about a new dawn for Gudjohnsen – Barcelona came calling. Signed by Frank Rijkaard, one season before the glorious reign of Pep Guardiola, Gudjohnsen was brought in as a replacement for Henrik Larsson who had just left the club.

Gudjohnsen made his debut for Barcelona in the second leg of the Spanish Super Cup – the first trophy of many that he would go on to win.

Gudjohnsen went on to play over 100 games for Barcelona whilst laying claim to a total of six trophies. He was part of the treble-winning side in 2008/09 which won La Liga, the Copa del Rey and the Champions League.

Due to his technical prowess, Gudjohnsen fitted into the Barcelona system perfectly, not many players have been able to master both the physical aspects of the Premier League as well as the technical characteristics of La Liga. Underrated throughout his career, Gudjohnsen allowed the players around him to blossom and prosper.

Although he played for a variety of other clubs after his Spanish adventure (notably Tottenham) Gudjohnsen’s career would come to an end shortly after playing for Iceland at the country’s first ever international tournament.

Gudjohnsen, now 37, would appear twice in the tournament, both times as a substitute. In the Quarter Finals against France, Gudjohnsen was handed the captains armband in the 82nd minute. Before Euro 2016, Iceland had never even reached a major tournament let alone get all the way to a Quarter Final.

The Quarter Final against host nation France proved a step too far for the Icelanders and thus became Gudjonsen’s last ever match for his country. A few months after Euro 2016, on the 8th September, Gudjohnsen retired from professional football.

Gudjohnsen will undoubtedly go down as one of the greatest Icelandic footballers in history and will always be remembered as a Chelsea great.