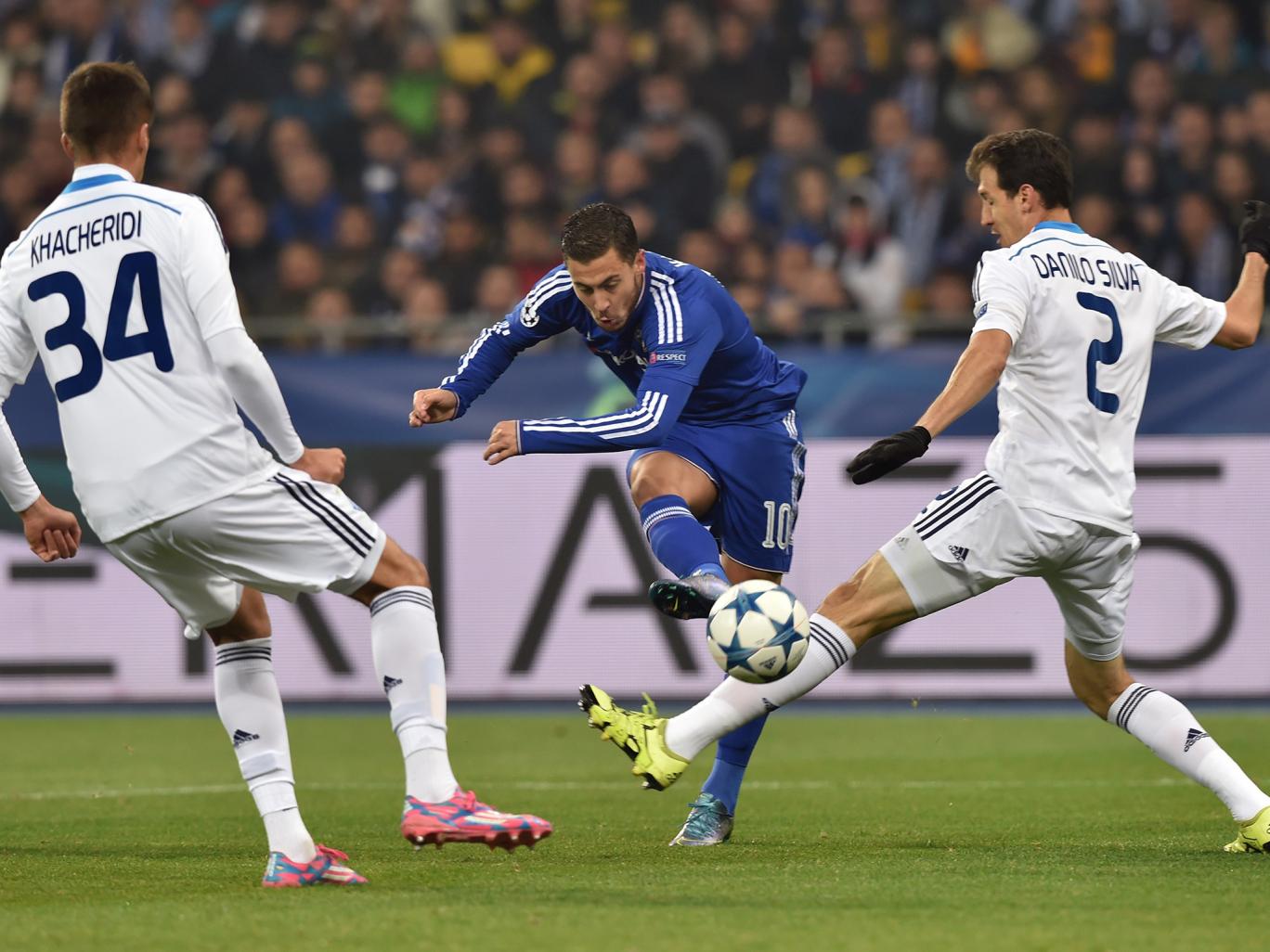 Chelsea’s nightmare start to the season continued with two further points being dropped in a game they dominated against Dynamo Kiev.

Eden Hazard hit the base of the post early on with a curling effort before Cesc Fabregas was incredulously denied a stonewall penalty as Chelsea had the better of the opening exchanges.

Nemanja Matic almost capped off a brilliant surging run but poked his effort wide, whilst Willian then rattled the woodwork with a swerving free-kick just two minutes after the restart as the Blues were frustrated on a cold evening in the Ukrainian capital.

But that dead-ball effort from the Brazilian signalled the last moment of serious Chelsea intent, with Jose Mourinho clearly instructing his charges to hold out for a draw, as opposed to pressing for three points which would have made qualification to the knockout rounds a more attainable target.

Instead, a paltry return of four points from their first three Champions League fixtures means the Blues sit three points behind group leaders Porto, and now face the possibility of failing to progress from a group that should have been a formality.

With Dynamo and Porto both to visit Stamford Bridge, Chelsea’s European fate remains – just about – in their own hands, but Mourinho will be left ruing what might have been had his side showed more desire in the final third.

Eden Hazard – restored to the team after being deservedly dropped for the weekend defeat of Aston Villa – was average at best, with his early effort that was fingertipped onto the post by veteran goalkeeper Olexandr Shovkovskiy his only significant impact on proceedings.

Instead, it was the in-form Willian who was Dynamo’s chief tormentor following yet another dynamic performance, and he played a vital role in turning over possession as Fabregas drove forwards and was blatantly floored in the box by a Serhiy Rybalka challenge in plain view of the referee.

Once more, Chelsea penalty claims were turned down, but it seemed that the Blues would not be left too aggrieved by that decision considering their early attacking intent. It seemed as if a goal could come at any moment, and first Matic, showing impeccable football, poked wide before Diego Costa came a stud’s length away from toeing a Willian set piece beyond Shovkovskiy.

Gary Cahill then had a header collected by the Kiev captain as Chelsea looked by far the better side in the first half.

The dominance the Blue exerted prior to the interval was almost rewarded just two minutes into the second period as Willian’s glorious free-kick shook the woodwork with the goalkeeper stranded, but that represented the last significant goalmouth action from a Chelsea point-of-view, and the Blues began to sit deeper so as to not risk losing the game.

The hosts duly grew more confident, with Andriy Yarmolenko their creator-in-chief, and Asmir Begovic had to be smart to make a strong parry at his near post after Derlis Gonzalis has escaped the attentions of makeshift full-back Kurt Zouma.

And though the Chelsea goalkeeper was rarely called into significant action, the Bosnian, who will no doubt play a pivotal role in deciding both Chelsea’s Champions League fortunes as well as those of his country, after they were drawn to face the Republic of Ireland in the UEFA Euro 2016 play-off round, had to be alert to push away a devilish Gonzalis cross.

Mourinho introduced Oscar for Fabregas as the Blues pushed for a goal that their first half display in particular had warranted, but that change killed almost all of the Blues’ remaining attacking panache, with Willian’s late effort from the edge of the box that faded wide summed up the Blues evening – close, but not close enough.

It was certainly a better defensive performance from Chelsea in comparison to their 2-1 reverse in the Dragao last time round, but one cannot help but feel that this is two points dropped in the grand scheme of things