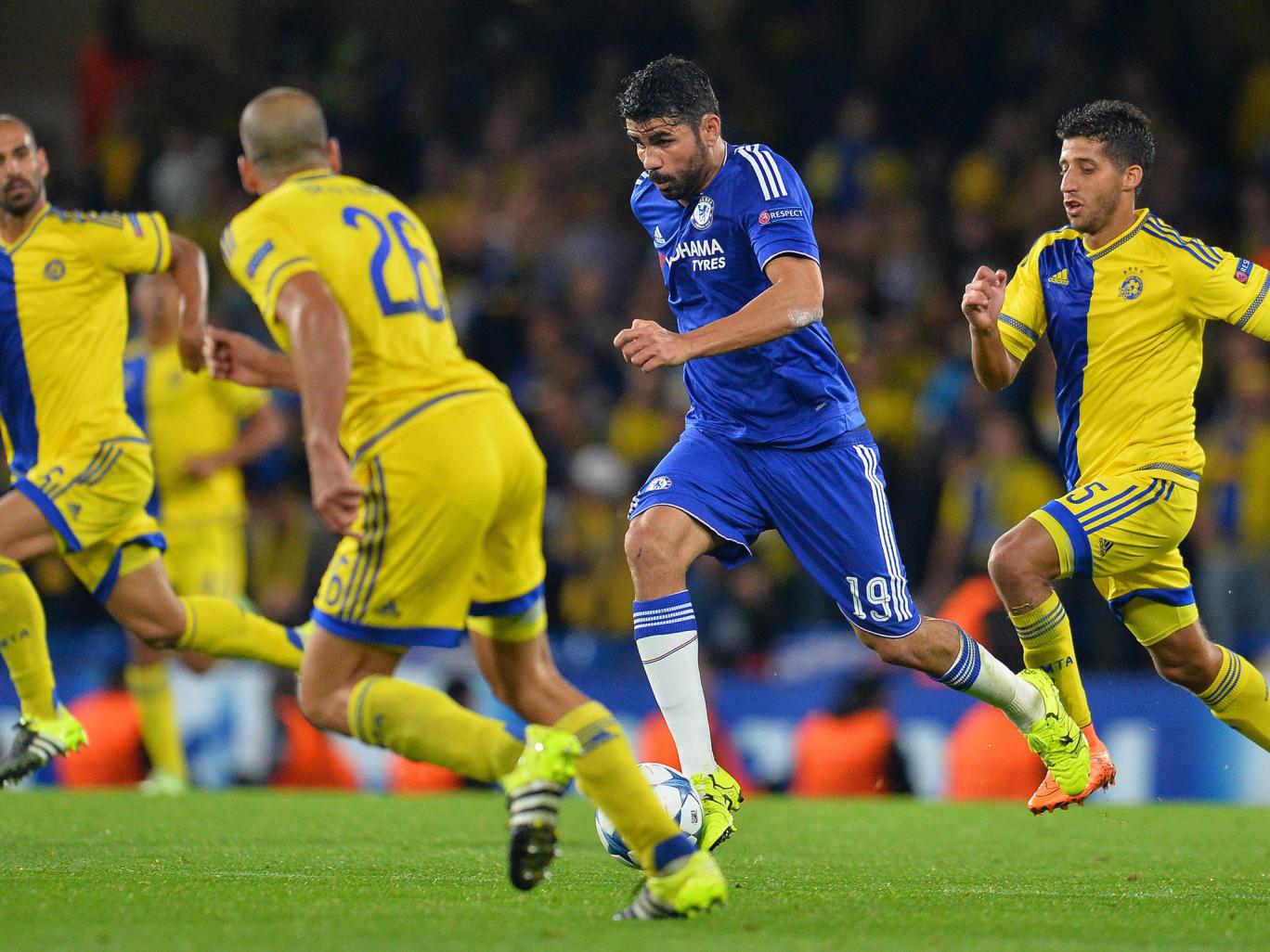 Chelsea eased to a comfortable victory over Maccabi Tel Aviv to maintain their hopes of progression to the Champions League knock-out rounds.

Needing a win to ensure they remained in contention to qualify, the Blues went into the half-time break with both a goal and a man advantage as, after Gary Cahill reacted quickest after his own initial effort had been saved to smash home the rebound, former Chelsea defender Tal Ben Haim saw red for a wild swipe at Diego Costa.

Despite the home side resolutely bouncing back from that double blow and almost equalising through Eran Zahavi, Willian netted a trademark free-kick – his sixth dead-ball strike of the season – to put the game beyond the realistic ambitions of the hosts.

Oscar then applied a layer of gloss to the scoreline when he tapped in from close range, whilst Kurt Zouma, on as a substitute for the injured John Terry, scored the fourth in stoppage time with a powerful header to guarantee the Blues a shot at progression to the last sixteen.

Chelsea would have progressed on the night had Dynamo Kyiv failed to win in Porto, but with the Ukrainian side securing three points, it means there is now a three-way contest for progression from the group.

Jose Mourinho’s men are, at the very least, assured of a berth in the Europa League’s round of 32, but the Stamford Bridge outfit will no doubt be eyeing up a spot in Europe’s more prestigious tournament.

The permutations for qualification are simple to grasp. With Kyiv at home to Maccabi on matchday six and therefore likely to add three points to their tally, a draw at Stamford Bridge between the Blues and Porto next month would result in a three-way tie at the top of the group.

The Blues benefit from having a superior head-to-head record against the Ukrainian side, which is significant considering that three years ago, a similar situation led to the Blues being dumped out of the Champions League. A victory over the Portuguese side would simplify matters and guarantee qualification for Mourinho’s side, whilst a defeat could have disastrous consequences.

They may well be without their captain, however, as Terry was stretchered off in clear discomfort midway-through the second period. A more pressing and immediate concern is the skipper’s availability for Sunday’s London derby against in-form Tottenham Hotspur, but the result here will hopefully encourage the defending Premier League champions, who have made it two wins from two following the international break.

Regardless of boasting over 65% possession in Tel Aviv, Chelsea were made to work hard for their opening goal, which came after Predrag Rajkovic had athletically tipped Cahill’s header onto the frame of the goal. Showing great predatory instincts that a certain Diego Costa ought to take note of, the England vice-captain was first to the loose ball and headed home to make it 1-0.

Chelsea’s job on the night became a lot easier when Ben Haim, who exactly eight years ago was partnering Terry at the heart of the Blues’ defence in a defeat of Derby County, inexplicably kicked out at Costa, earning him a straight red card.

Yet any thoughts that that moment of madness would consign Maccabi to an inevitable defeat were quashed almost immediately after half-time as the home side showed commendable character to take the game to the visitors.

Though Rajkovic had to excel himself to first turn aside Eden Hazard’s well-struck effort, and then brilliantly deny Cesar Azpilicueta from close range, Zahavi broke away as produced an equally outstanding stop from Asmir Begovic, who fingertipped the striker’s effort around the post.

Acknowledging that warning shot, Chelsea quickly moved through the gears and eventually made the game safe with a quarter of an hour remaining, as Willian, who became the first player in Chelsea’s history to score five direct free-kicks in one season, added one more to his tally to further increase his growing stock. Chelsea’s clear player of the season – so far – this time deliciously whipped the ball over a stationary wall to make safe the three points.

All that was left was for the Blues to apply a quickfire coup de grâce as Oscar made it 3-0 just minutes later, toeing home Baba Rahman’s devilish delivery from the wing, whilst the Brazilian later turned provider for substitute Zouma, who rose highest to head home powerfully at the near post.

A tense matchday six now awaits Mourinho and his charges….