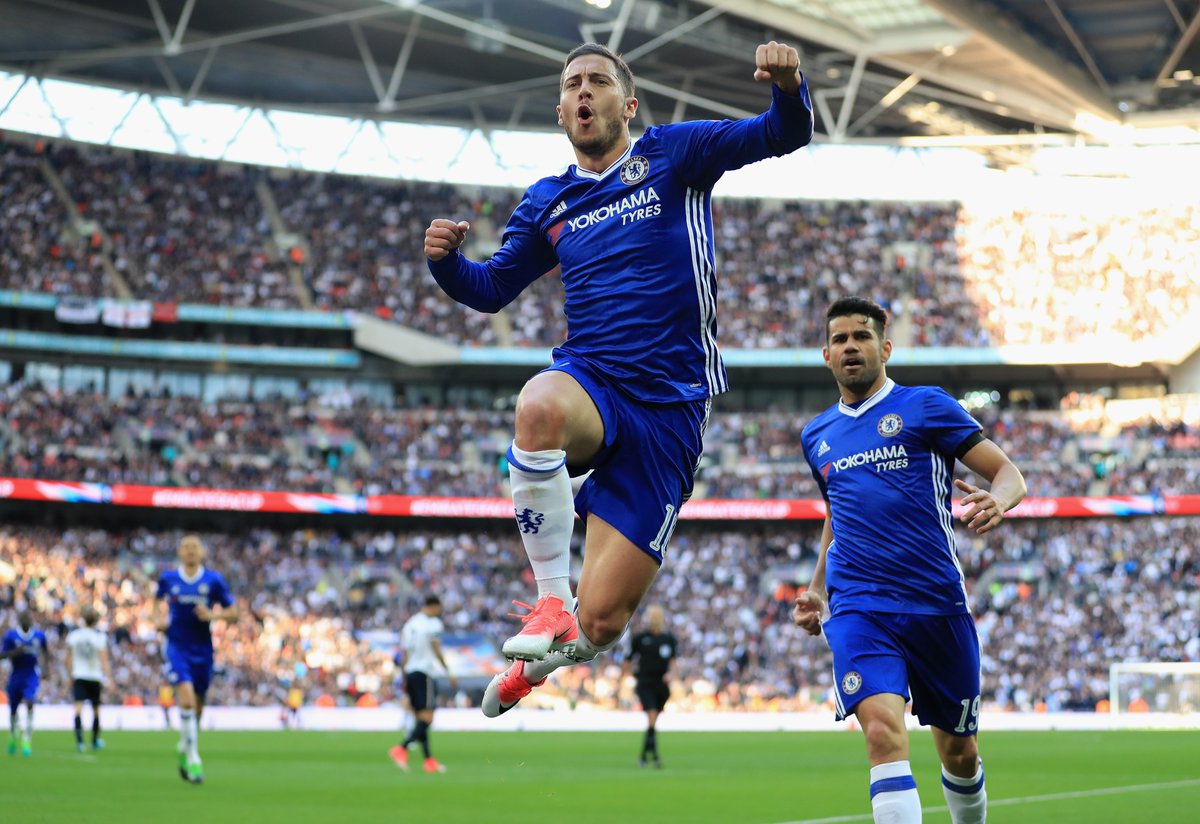 Eden Hazard came off of the bench to score, helping Chelsea book their place in the FA Cup final, as Antonio Conte’s side beat Tottenham Hotspur 4-2 at Wembley Stadium in a thrilling match.

Much of the talk before this semi-final had surrounded Conte’s decision to bench Hazard and Diego Costa, possibly with an eye on his side’s game against Southampton on Tuesday, but his decision to do so paid off as the former came on in the second-half to turn the tide of the game in Chelsea’s favour.

It didn’t take long for the Blues to open the scoring, as Willian fired a free-kick past Hugo Lloris in the 5th minute. Following a foul on Pedro by Belgian centre-half Toby Alderweireld, the Brazilian stepped up to the dead ball opportunity and once again found the back of the net from that familiar position.

However, keeping in fashion with the manic start to the tie, Spurs quickly found their equaliser not too long after. In the 18th minute Harry Kane stooped low to brilliantly flick Christian Eriksen’s cross past a sprawling Thibaut Courtois.

Following the equaliser, Spurs took control of the game and looked to press home their dominance. Yet, despite being on the back foot, Chelsea did once more take the lead before the break.

Conte’s side were awarded a penalty for Son Heung-Min’s foul on Victor Moses, who was tripped by the South Korean as he charged into the penalty area. After a short debate with Michy Batshuayi over who would take the spot kick, Willian stepped up once more to add his second of the game, as he confidently buried the ball.

Shortly after the half-time break, Spurs once again found an equaliser, when Dele Alli this time, met Eriksen’s fantastic ball into Chelsea’s penalty area, and stabbed the ball into the top corner past Courtois.

Seemingly as a result of the setback, Conte opted to make some changes and brought on the two men, Costa and Hazard, who had been the subject of much of the pre-match talk.

The pair struggled initially to impact the game, as Spurs dominated the ball, looking to take the lead for the first time. Despite their dominance, and after a period of sustained pressure, it was Chelsea, yet again, and for the final time, who found the lead.

Mauricio Pochettino’s side failed to deal with Chelsea’s first corner of the game, as the ball fell to Hazard just outside the penalty area. The Belgian took a look up at his target and rifled the ball into the corner of the net.

To add more salt to their wounds, Chelsea didn’t stop there. Nemanja Matić struck a spectacular fourth and final goal to seal Chelsea’s progression to the final. Set up by Hazard from 25-yards out, the Serbian hit the ball first time with venom, and with Lloris rooted, found the top corner.

Chelsea will now face the winners of Sunday’s semi-final match-up between Manchester City and Arsenal in the final on Saturday the 27th of May.