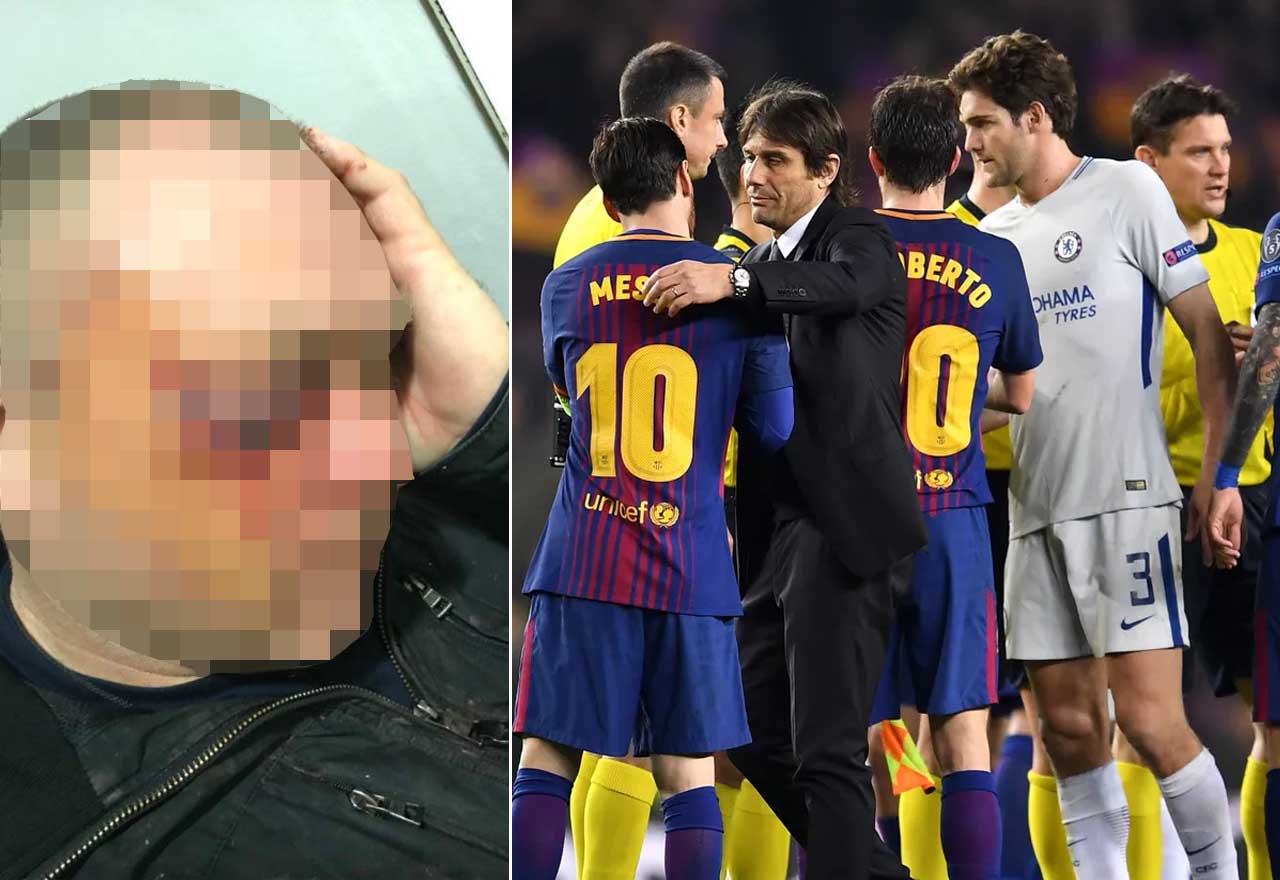 This is absolutely shocking, and not for the feint hearted. If you’re eating your dinner, it’s probably best you look away now.

As reported by the Mirror, Chelsea fan Colin Twyman has been left looking like he’s been through 12-rounds with Anthony Joshua after allegedly being sent into the path of a group of Barcelona ‘thugs’ by Nou Camp stewards. Unless you’ve been hiding under a rock following our humiliation at the hands of the La Liga heavyweights, you’ll be well aware of the violent scenes before, during and after the game, as well as the disgraceful recounts given by Chelsea fans describing the actions of the Spanish authorities.

Speaking to the Mirror, a Chelsea fan tells his story of how he and friends were led into the path of an armed mob by stadium staff prior to the game.

“We came out the metro around 7.45pm. We were on our way to meet our son’s friend to pick up a ticket for the game and were directed towards a gate to enter the ground.”

“Once we arrived to the gate, we were told it was shut and we couldn’t enter through there – despite being told where to go.”

“We were sent away from the stadium and ended up having to go down a side street to reach the ground. We went down the street and immediately realised something was wrong.”

After going on to explain how the angry mob started attacking the fans with fireworks, glass bottles and pepper-spray, the friend of the attacked Mr Twyman added how he was left fearing for his life, as the Mirror report:

“Colin realised what was happening and went to brush them off him – he thought they might kill him. We don’t even know what happened to him but he was rushed off in an ambulance.”

“It was then he was hit by a bag filled with golf balls or snooker balls, his eye immediately closed up and there was blood everywhere. It was horrible.”

These fans found the time and funding to follow their beloved club to a different country to watch them play in the biggest game of their season. They could forgive the negative result, Barcelona are one of the best teams in the world, but way they were allegedly treated during the trip was an absolute disgrace.

Barcelona defeated Chelsea 3-0 at the Nou Camp to knock us out of the Champions League.

UEFA need to fully investigate what happened that night and those responsible for putting Chelsea supporters in harms way need to be punished in accordance with the seriousness of their crimes.

We wish Mr Twyman, who may need surgery due to the extent of his injuries, and any other Chelsea fans hurt in Barcelona, a speedy recovery.