Talk Chelsea
Home News Maurizio Sarri has been let down by the Chelsea board again over...
1.3k
SHARES
ShareTweetSubscribe

If you’d asked Maurizio Sarri a month ago whether he wanted to keep Cesc Fabregas at the club, there’s no doubting he would have said yes.

The Spaniard is his only real backup for Jorginho, as we saw in countless games in the Europa League and Carabao Cup. Without him, the squad is really stretched – Sarri himself said that if Fabregas had been on the bench against Newcastle, he would have brought him on.

So why was Cesc allowed to go? We all assumed – and still do – that it was because a replacement was being sorted. That’s why the outgoing midfielder was left briefly in the lurch having said his goodbyes to the Bridge.

If that’s the case, where is this new player? Sarri said himself he “needs” a Cesc Fabregas replacement, and now we’re getting dangerously close to having had two games with nobody on the bench.

In this vital period of the season, every day and every minute on the pitch and training ground counts, and the board have really failed their manager if they’ve cashed in on one asset before they’re ready to replace him.

look its easy to blame the board but there are 3 things you aren’t considering: 1) its a sellers market. Every club in England is cashed up from TV deal and that means intense competition especially when 2) the number of real quality players available is very small. Also 3)… Read more »

Agree totally … we must block the bottle before we throw away the old cork ! 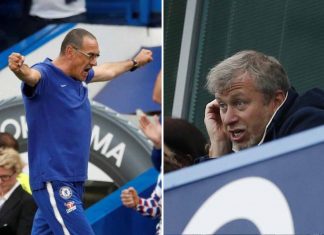 Previous article“I can improve a lot” – Can Ross Barkley become a Chelsea starter or will he be forever be a squad player?
Next articleVideo – All Pedro’s Chelsea goals as Spanish winger makes the difference again