Alvaro Morata signed for Chelsea last summer amid a flurry of excitement amongst Blues fans but despite a promising start, the striker hasn’t progressed as expected and has fallen down the pecking order.

The Spanish forward may benefit from getting a Premier League season under his belt, however, he’s been heavily linked with a move away from Stamford Bridge.

Morata has netted 15 times in all competitions for Chelsea this season but has cut a frustrated and uninterested figure on a number of occasions throughout the campaign. His miss against Burnley in April was indicative of his lack of confidence in front of goal and he has netted just three times in 2018, two of which came in the FA Cup.

Although 15 goals isn’t a bad return, Blues fans were hoping for a better strike-rate from their record £58 million signing and the fact that former-Chelsea winger Mo Salah has broken the 40-goal barrier for Liverpool is likely to have further added to their frustrations.

He was tipped as a possible contender for the golden boot at the beginning of the campaign but, following a 12-game drought, he may now struggle to even reach the 20-goal mark.

The striker isn’t the only player whose future at the club is in jeopardy, with Tiemoue Bakayoko reportedly keen to leave, and the midfielder has been linked with Borussia Dortmund. He has struggled to adapt to the English top flight and has been unable to replicate his Monaco form.

Antonio Conte’s future is seemingly likely to lie elsewhere, with the Italian boss expected to leave West London this summer. Maurizio Sarri is one of the names who has been linked with the potential vacancy.

With so much potential upheaval, it’s unsurprising to see Chelsea priced up as fourth favourites at 12/1 in the Premier League betting for the 2018-19 season. Manchester City are available at 4/6 whilst Liverpool are currently 5/1.

Juventus are one of the clubs linked with a move for the out-of-sorts striker. He enjoyed a profitable couple of years in Turin between 2014 and 2016 and is believed to be keen to return to Serie A. Although he was largely deployed from the bench, he managed to net 27 times in 93 appearances and regularly featured in the Champions League.

AC Milan are another club who have expressed interest in bringing the striker back to the Italian top flight. Chelsea are believed to be keen on a loan move which could cost his next employers around £13 million.

He is still loved by the Juventus fans and the current tactics employed by Massimiliano Allegri are likely to suit Morata. He has evidently struggled in the lone-frontman role and has often looked isolated however Juve are far more fluid and adaptable and that would surely benefit the Spanish striker.

He will also be determined to resurrect his career and return to the Spain squad after being left out for their international friendlies at the end of March. He has fallen out of favour with Julen Lopetegui and his place in the World Cup 2018 squad is in doubt.

It looks set to be an extremely busy summer at Stamford Bridge and Alvaro Morata could be one of the players leaving West London in the next few months. His body language has suggested he’s keen to leave the club and a return to Serie A looks extremely likely. 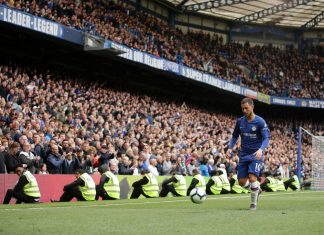 Previous article(Video) Eden Hazard insists there is ‘no chance’ he will break hearts with summer move
Next articleHuddersfield Town injury news: Relegation battlers could be missing four for Blues trip