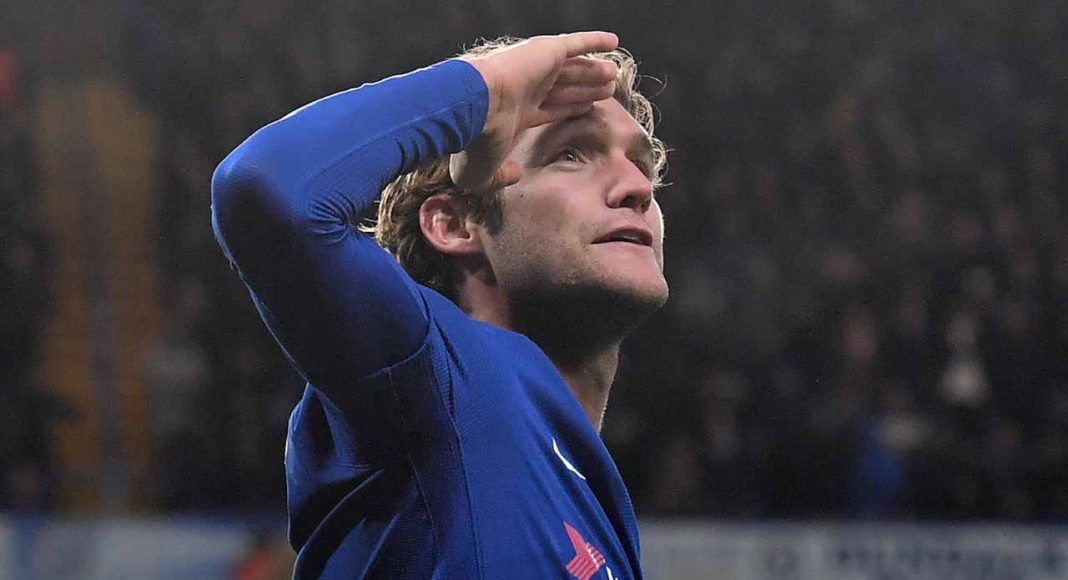 If you haven’t already heard, Marcos Alonso has signed a new five-year contract with Chelsea. The club confirmed the news on their official website on Wednesday morning.

Alonso has scored some memorable goals since joining Chelsea in the summer of 2016. We’ve chosen three of the Spaniard’s 15 strikes in Blue that depict the reasons why he has earned himself a long-term stay at Stamford Bridge.

This was the game that Alonso revealed to us all just how much of a threat he can be on the front-foot.

Chelsea went seven points clear at the top of the Premier League against champions Leicester City, with Alonso bagging the opening two goals in a convincing 3-0 win.

Diego Costa was absent due to reasons unknown and there were question marks over whether Chelsea could win without him. Alonso responded to any doubts emphatically.

Second against Spurs at Wembley

His first strike in this game was a gorgeous free-kick which left Hugo Lloris with no chance. It was a tough decision to leave it out, but the circumstances surrounding the second makes it all the more special.

Alonso raced down the left-hand-side and beat Hugo Lloris to win the game for Chelsea in the 88th minute. The reigning champions defeated arch-rivals Tottenham at Wembley in dramatic fashion.

Even if last season didn’t end in the manner that we would have hoped, we will remember this goal as a great moment in a campaign to forget.

Late winner against the Gunners

Having assisted Pedro’s opener nine minutes in, Alonso found the back of Petr Cech’s net with nine left on the clock to secure Maurizio Sarri’s side all three points.

Alonso had been converted to an archetypal left-back, having played at left-wing-back under Antonio Conte, but proved that he can be every bit as effective in that role.

It was also his third goal against Arsenal in just three seasons as a Chelsea player. He’ll no doubt be hoping to get on the scoresheet once again when the two sides meet in January.