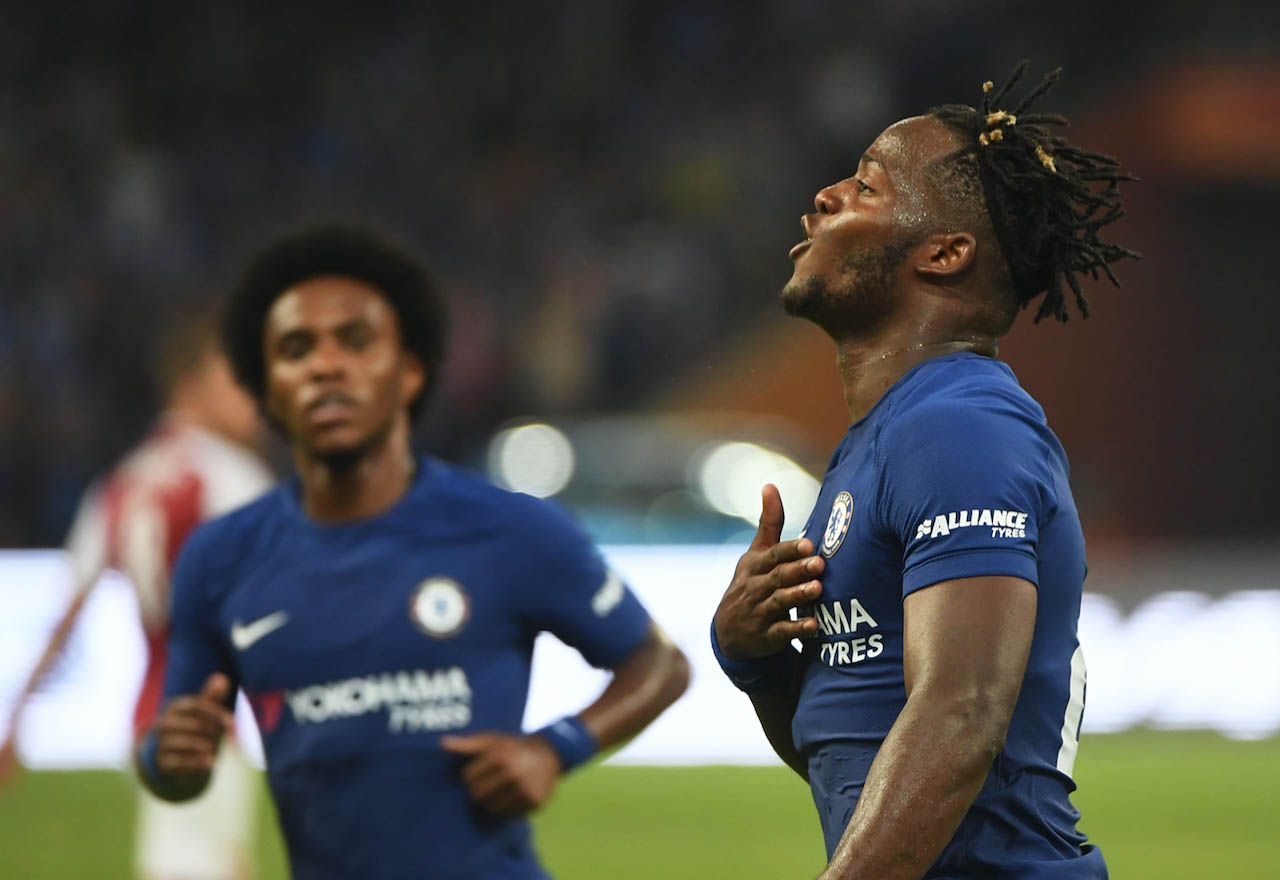 Following the omission of wantaway striker Diego Costa from Chelsea’s pre-season tour of Asia this summer, Antonio Conte must decide who is going to be the club’s first choice striker come the start of the 2017-18 campaign.

The Blues face London rivals Arsenal in the season’s traditional curtain raiser – the Community Shield – this Sunday and, after spending a big chunk of the club’s transfer budget on Alvaro Morata, Chelsea’s new no.9 looks set to be Antonio Conte’s first choice striker for the upcoming season.

However, on the back of an excellent pre-season, some fans will be of the opinion that Michy Batshuayi should be the man to start against Arsenal at Wembley. But why should Antonio Conte opt for Batshuayi over big money signing Alvaro Morata?

As we mentioned earlier in the article, Michy Batshuayi has had an excellent pre-season. In four matches against testing opposition, the Belgium international scored five goals, assisting on three occasions. Despite the fact that these were only pre-season friendlies, a figure of 1.25 goals per game is not too shabby for any striker.

Moreover, during Chelsea’s tour of Asia in which the club played against top European opposition, the 23-year-old impressed for the Blues, scoring twice against Arsenal and once against Bundesliga champions Bayern Munich. As a result, the young forward demonstrated that he can mix it with the best of Europe’s elite when given the opportunity.

Yet, what was most impressive about Michy Batshuayi during Chelsea’s pre-season tour of the Far East was the striker’s hunger and desire to show his worth to Antonio Conte. Despite being aware of the fact that Chelsea would sign a top European striker this summer, the Premier League champion remained determined to prove that he should be the man to replace Diego Costa. For this reason, Conte must reward the striker with a start against Arsenal on Sunday.

As well a having a phenomenal pre-season record, there is another key reason why Michy Batshuayi should start at Wembley in the Community Shield Final.

Having arrived from Real Madrid just over a week ago, it would be true to say that Alvaro Morata is yet to fully understand how he should operate in a Chelsea team. For example, what runs should he make? When should he press the opposition defence? Who should he look to for that killer pass? Although there is no doubt that a top talent such as Morata should slip straight into a team without much of a problem, in the final of a competition Chelsea should be fielding their strongest team rather than their strongest individuals.

On the other hand, Michy Batshuayi knows the Chelsea team very well. The Belgium international has been with Chelsea for just over a year now and made twenty appearances for the Blues last term. As a result, Batshuayi knows how to lead the line for Chelsea and understands the role that Conte expects his strikers to play perfectly. In Chelsea’s first competitive match of the season, one which has the promise of silverware, it would surely be better to field a forward who has a better understanding of his teammates?

Although Morata is sure to be Antonio Conte’s first choice pick for the upcoming season, the Italian manager should start Batshuayi on Sunday in order to give Chelsea the best chance of winning the club’s first piece of silverware this season.

Should Michy Batshuayi start against Arsenal? Leave your opinions and thoughts in the comments below.

Bashuayi currently understands the nitty gritty of the Epl more than Alvaro.Starting Alvaro before introducing Bash to the the game would amount to a serious setback on conte’s tactical approach to the game.lets not forget that Bash has been with the team since last season and having been an understudy… Read more »

Start Bats but make sure to sub Morata before 70′. It’d be a good confidence boost for him to score.

I do think conte should use a 3-4-1-2 with Willian as an attacking midfielder…. Then Morata and Batshuayi should play up front

Comment: Miky is trying hard , but Morata is faster and smarter than Miky, moreover , Alvaro has a dribbling accurate more than Miky, therefore Alvaro should start this game

I support bash to start,he still has unfinished business in d squad

D best to do against Arsenal is to start Michy…..

All d facts are there….

Chelsea cannot afford to lose another silverware to Arsenal…..cos it pains.

Comment:Michy should start give Morata time to adapt..

Start him, play Morata later in the game

Comment:Batshuayi should start against arsenal pls

Morata should start becouse i blieve he will score against arsenal

Comment:Batman should start, he deserves a start after his impressive pre-season and end of season form. Conte is aware his hunger for goal.

I once commented on Bashuayi towards the end of last season about his thirst for goal and his form
; i m therefore not surprised to see him in good form. Morata may play the last 20 minutes but Bash should start. He has a point to proof.

The batsman should start while morata continue to settle in gradually, I totally concur.

yes he should start

Comment:pls conte m b should start on Sunday

Batshuayi should Start as the main striker in the community shield cup match with Morata coming on from the bench.

Comment:I think is a good start for chelsea bcos he did well in pre-season, morata may not understand the team well

Comment:Michy should start give Morata time to adapt..