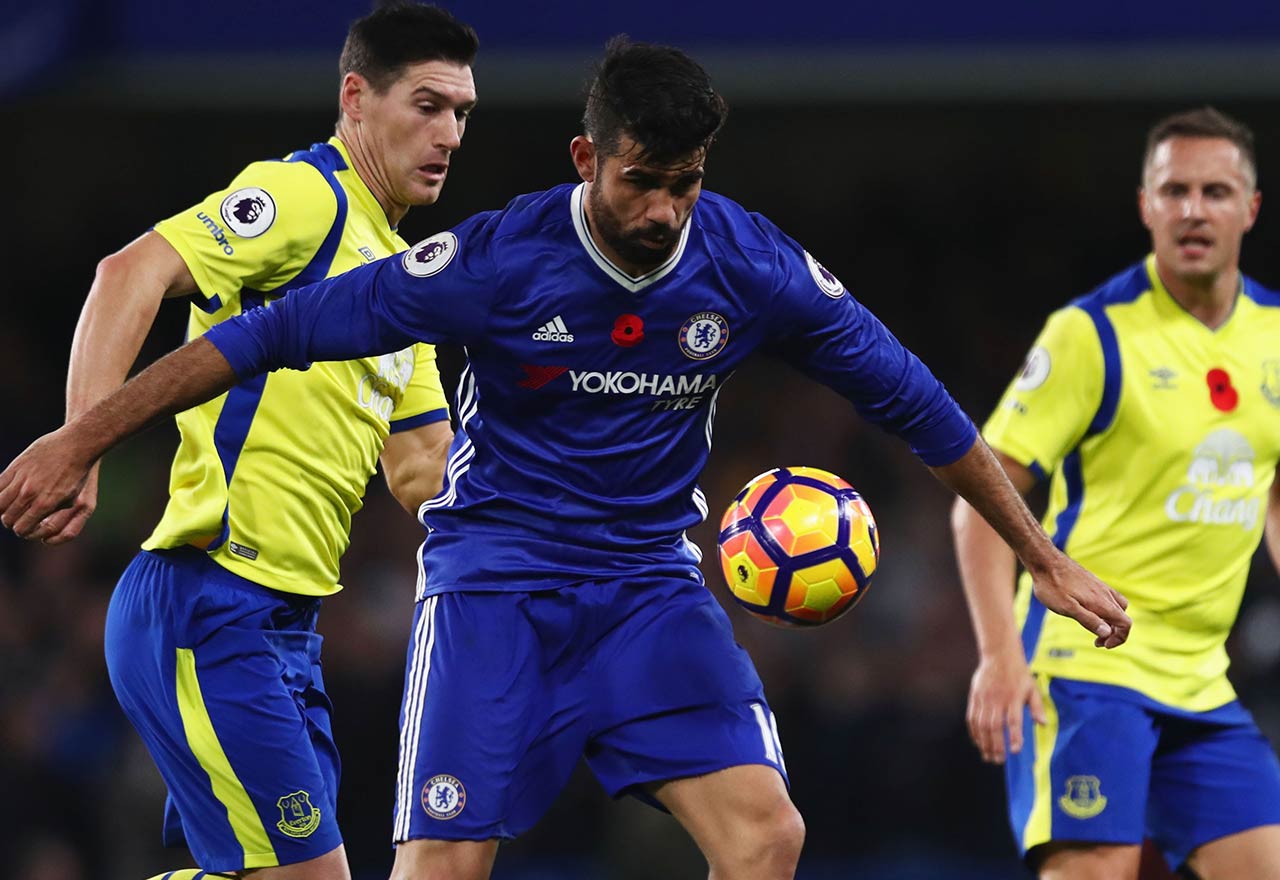 Chelsea’s next test in their pursuit of the title is to face Everton at Goodison on Sunday, a game that looks like the toughest of the remaining five fixtures of the season.

The Toffees haven’t lost on home turf in eight games, a run stretching back to the Merseyside derby against Liverpool on December 19. They have proven to be a bogey team for Blues in recent years, although November’s 5-0 win was arguably Chelsea’s best performance of the season.

The Blues had a seven point lead at the top of the Premier League table cut back to four points after Tottenham’s 1-0 win at Crystal Palace last night.

Antonio Conte has no new injury worries for the game at Goodison but are expected to revert to the usual front three of Diego Costa, Eden Hazard and Pedro.

Gary Cahill returned to score on Monday against Southampton after briefly being sidelined due to a gallbladder condition. He is set to continue alongside Cesar Azpilicueta and David Luiz as the normal back three.

For Everton Seamus Coleman remains a long-term casualty for the Toffees, who could start Mason Holgate on the right of a five-man defence.

Matthew Pennington is pushing for a place alongside Phil Jagielka and Ashley Williams, although Kevin Mirallas could feature if Ronald Koeman opts for a more traditional formation.

Chelsea have won 78 points from their 33 Premier League games so far. This is the eighth occasion that a side has won 78+ points from 33 games in the competition and half of those have been by Chelsea (Chelsea – four times, Manchester United – three times, Arsenal – once).

Should Chelsea win their remaining five Premier League matches of the season, they will finish the campaign on 93 points. This would be the second-best points tally by a side in a Premier League season, after Chelsea in 2004-05 (95).

Everton have won five of their last seven Premier League games against Chelsea at Goodison Park (L2), two more than they recorded in their previous 17 in the competition.

Only against Tottenham (92) have Chelsea scored more Premier League goals than versus Everton (80).

Following his midweek brace against Southampton, Diego Costa now has 19 Premier League goals in 2016-17. Without these goals, Chelsea would be 15 points worse off than they are and no player has seen their goals win more points for their side than Costa this season.

Cesc Fabregas has had a hand in eight goals in his last seven games against the Toffees in the top-flight (four goals, four assists).

Romelu Lukaku has failed to score in all five of his previous outings against his former club Chelsea in the Premier League, attempting 12 shots (incl. blocks) in the process.

Chelsea are favourites to pick up all three points on their travels this weekend and to take another step closer to lifting the trophy. They can be backed at 21/20 to win at Goodison Park on Sunday afternoon.

The home side, Everton, are priced at 5/2 to upset the league leaders and the draw is 12/5. (Prices from Bet on Brazil – odds may fluctuate)

Is the game on TV?

The will be shown live on Sky Sports 1 in the UK, with coverage starting at 1pm.

It’s going to be a hard game against an Everton side that’s won there last eight home games in a row. If Chelsea can get past this test with victory then they’ll be nailed on for the title with four games left to play against so-called smaller teams in the Premier League.

I think we can get victory if Diego Costa turns up like he did on Monday against Southampton.