Last week’s game against Swansea saw Southampton to 5 clean sheets in a row, coinciding with first choice keeper Fraser Forster returning for injury. Chelsea have scored 17 times in the last 6 matches in all competition, but will find it much harder against Southampton than a bunch of teenagers from Manchester. Diego Costa has been in fine form since Hiddink returned to the club, he will have to be in fine form as Southampton’s preferred formation 3-5-2 means that Costa will be facing 3 centre backs at once.

The question of what has happened to last season’s player of the season, Eden Hazard, has confused football fans around the world. Last week he was hailed for a Man of the Match performance against a below par Manchester City team, where he assisted twice and netted one for himself with a finely placed free kick. Whether this was due to the poor second half performance of an inexperienced Manchester City team or it was a return to form to for one of the world’s best players, we are yet to see, but a strong performance against a formidable Southampton defence would be a great signal that there is more to come.

In the absence of John Terry and Kurt Zouma, Hiddink has had to make drastic changes to his back four. Seeing Garry Cahill return to the starting line up, Ivanovic pushed to his old position at centre back, Azpilicueta playing on his natural side and Baba getting a nice run of games. I have been particularly impressed with the two full backs, they have been strong defensively and provided a stronger attacking than when Ivanovic plays and Azpilicueta is played on the wrong side.

I am expecting a close game with either side having the potential to take all 3 points.

Chelsea
John Terry (Hamstring) will still be side-lined, after the injury he picked up at home to Newcastle, although there is word he may be available from the bench for the next game. It was suggested that this weekends game would be when Pato would reach match fitness, however it is reported that he still lacks match fitness, so could miss another game. Wantaway Columbian Falcao (calf) is still side-lined with injury, possible due to lack of motivation to recover. Zouma (Knee) is side-lined for the season.

Southampton
Wanyama will miss the match through suspension, after picking up his third red of the season against West Ham. Gardos (Knee) and Rodriguez (Foot) both returned to training this week but are likely to miss the weekend’s game. 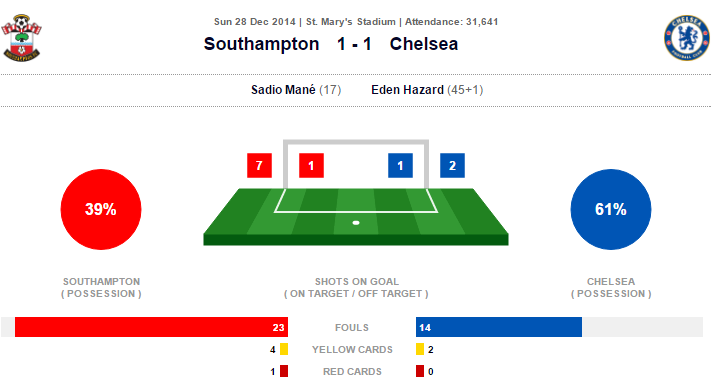