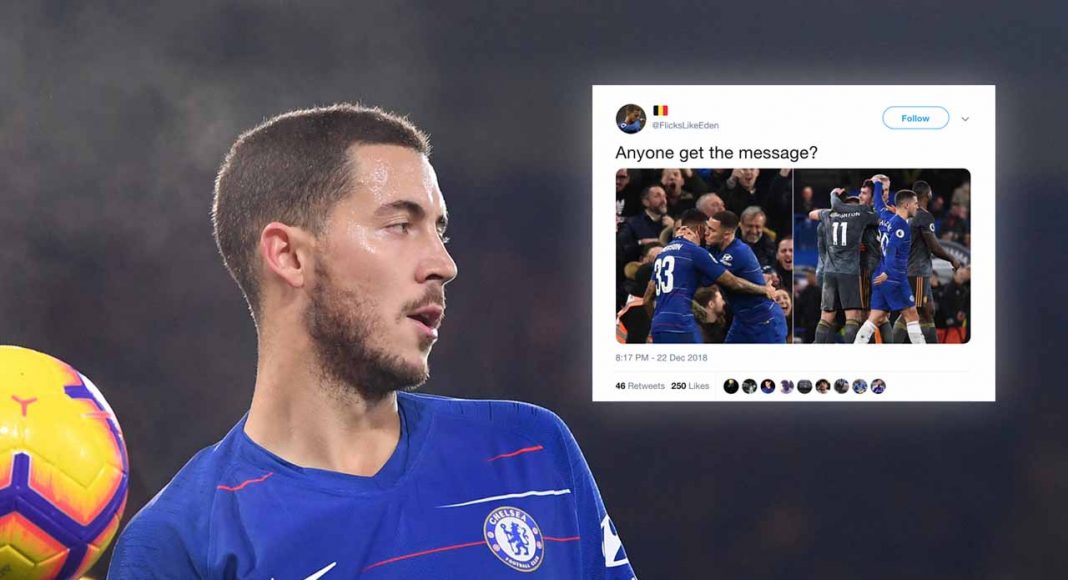 Has Eden Hazard’s let the cat out the bag about his real feelings towards Chelsea left-back Marcos Alonso?

Chelsea fans on Twitter have a theory about Hazard’s actions over the past week, and it could suggest that he’s unhappy with the support he’s provided with down the left-hand-side of the Blues’ attack.

Alonso has his fair share of critics within the Chelsea community. As effective as he can be in front of goal, his crossing is pretty poor and his defending is suspect.

We’ve taken notice of that over the past couple of years, and it’s hard to imagine that it has been missed by Hazard, who has been out on the left with him the whole time.

Have a look at the two pictures in the below tweet. Hazard looked incredibly happy while celebrating with Emerson Palmieri, as well as acknowledging the good performance of Leicester City’s Ben Chilwell.

Anyone get the message? pic.twitter.com/Q2ZcXruixz

Is this the most subtle of hints that he is hoping Chelsea invest in a new left-back, or give Emerson a chance? Let us know your thoughts in the comments and on Twitter @TalkChelsea.

Owing to me alone, Chelsea needs only a striker. We have all the players a team need to compete. THE problem is, their usage. To our coach, every player needs improvement. The big questions are, where? How? and when? These are the real questions our coach has to have in… Read more »

We need Alex Sandro of Juventus.

I think it’s high time we try to give Emerson enough chances for him to do what he does best.

This Line-up can yield us good results mostly.

Chelsea has never lost a game when Emerson Pameiri plays. But when Alonso plays we have lost games and the goals comes from his side, the left back. Surprisingly Sarri loves him most that Emerson Pameiri who is good and communicates well with Hazard. Sarri is a very strange manager… Read more »