Talk Chelsea
Home News FIFA 18 Launch – Everything you need to know about Chelsea on... 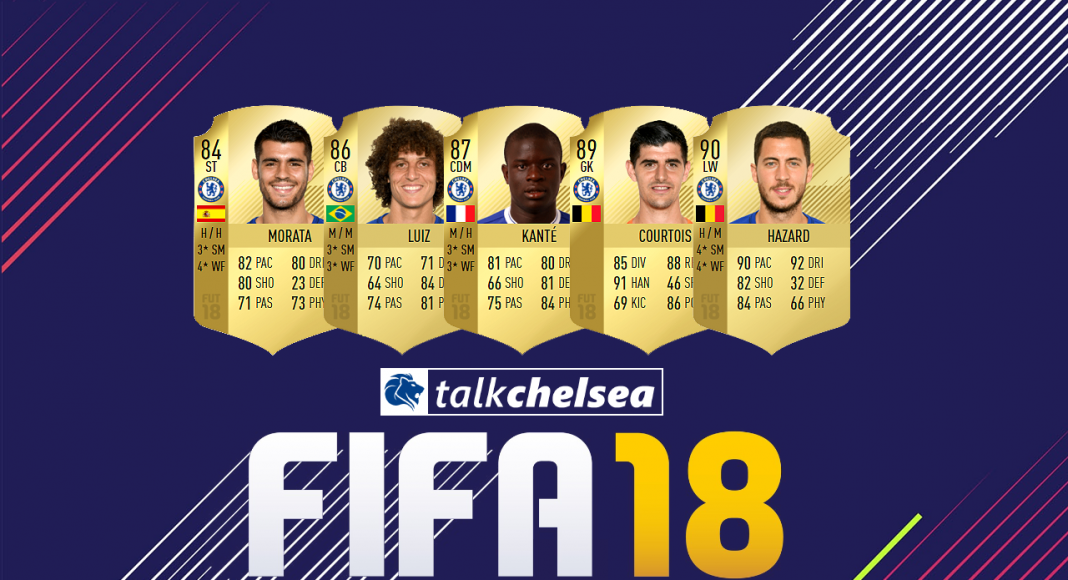 FIFA 18 has finally arrived for those that pre-ordered the more expensive Ronaldo and Icon editions of the game and the Chelsea players are looking formidable.

Buyers of these early access FIFA 18 editions have been given three-day early access to the full game so that they can get a head start in FIFA’s Ultimate Team game mode and maybe pack the highest rated player in the Premier League, Chelsea’s own Eden Hazard.

FIFA 18 has been one of the most anticipated FIFA editions of all time thanks to the introduction of the Weekend League in FIFA 17. FIFA 17 spawned the FIFA esports scene. Professional FIFA players now compete in tournaments and leagues across the world.

The two biggest FIFA tournaments of FIFA 17 – the Ultimate Team Championship Series and the FIFA Interactive World Cup handed out prize money of $100k and $200k respectively to the winners of each tournament.

EA, the creators of FIFA 18 have promised that FIFA 18 will do even more to expand the FIFA esports scene. This includes giving the millions of fans around the world the opportunity to bet on FIFA 18 competitive esports matches and tournaments like they would a real football match. Truly, FIFA as an esport is hoping to use real football as a platform to build itself upon.

Of course, FIFA 18 has stayed true to real football by ensuring that Chelsea are one of the best teams not only in the Premier League but in the whole game. So without further ado, here are the Chelsea players to look out for in FIFA 18.

We start with the highest rated player in the Premier League – Eden Hazard. Hazard has risen from an 88 rated player in FIFA 17 to a 90 rating in FIFA 18. Although the Belgian had his fair share of injury problems last season, he was one of Chelsea’s stand out players last season – high kudos given that Chelsea had several stand out performers during the course of their title winning 16/17 season. Each and every one of Hazard’s main stats has risen so expect the tricky winger to be one of the most sought after and expensive players on the game. Alvaro Morata has kicked off the new season like a house on fire. With goals against Everton, Burnley, Leicester and a hat-trick against Stoke last weekend, the young Spaniard has filled the boots of Diego Costa nicely.

His FIFA 18 stats are looking promising too. With pace, dribbling and shooting stats all in the 80s, the striker is sure to occupy the places of many Ultimate Team squads. So far this season, Morata has scored the same amount of league goals as both Sergio Aguero and Romelu Lukaku whilst also playing less minutes than both aforementioned strikers.

If Morata keeps up his scintillating early season form, expect his overall rating to increase when the winter updates are released. N’Golo Kante’s rating has been boosted significantly since the last installment. The French man has risen six points from a rating of 81 to 87 which ensures that he will be one of the most popular picks for FIFA Ultimate Team players this year.

Despite being just an 81 rated player last season, the anchorman was one of the best players in the whole game – his real life determination, stamina, attitude, anticipation and tackling abilities were matched like for like in the video game.

This year, Kante will be a rock throughout various Ultimate Team squads. Uncompromising, hardworking, pacey and solid – what more do you want in a holding midfielder David Luiz returned to Chelsea at the start of last season with a point to prove and boy has he done that. During his first stint at the club, Luiz was constantly criticized by the press and pundits.

He was labeled; too extravagant, a liability, and too much of a risk taker – no self-respecting centre back would ever want to be described this way. But after spending two seasons away from Stamford Bridge, David Luiz was the wall in the three-man defensive backbone that led Chelsea to last season’s Premier League title.

The Brazilian’s 86 rating means that he is one of the highest rated defenders in the Premier League although, Luiz himself told reporters that he was disappointed with his FIFA 18 stats, most notably the fact that his pace had been downgraded from 73 to 70 and the fact that N’Golo Kante has a better ‘shooting’ rating then himself.

Incidentally, Cesar Azpilicueta has an 85 rating whilst Chelsea captain Gary Cahill is rated a somewhat disappointing 84. Second in the Premier League goalkeeping department behind only David de Gea, Chelsea’s ever reliable shot stopper remains one of the best goalkeepers on the game. Still only 25 years of age, the Belgian still has a long, and hopefully prosperous, Chelsea career in front of him. Although De Gea is rated at 90 copared to Courtois’ 89, the Chelsea keeper has significantly better handling stats than his Man Utd counterpart and the exact same positioning skills.

This time next year I suspect all of the above will have higher ratings. Bakayoko’s physical and defensive stats look nice but his pace and passing is much to be desired. Zappacosta also has quite nice stats despite his rating of below.

Expect Zappacosta to be fighting hard for Victor Moses’ place in the starting eleven though, so a winter upgrade could be a possibility for the Italian wingback. Danny Drinkwater, on the other hand is not looking good at all.

I suspect the midfielder, who was pivotal in Leicester City’s title winning side only 2 seasons ago will be less than impressed with his ratings.