Talk Chelsea
Home News Sarri-ball: What will it take to transform Chelsea? 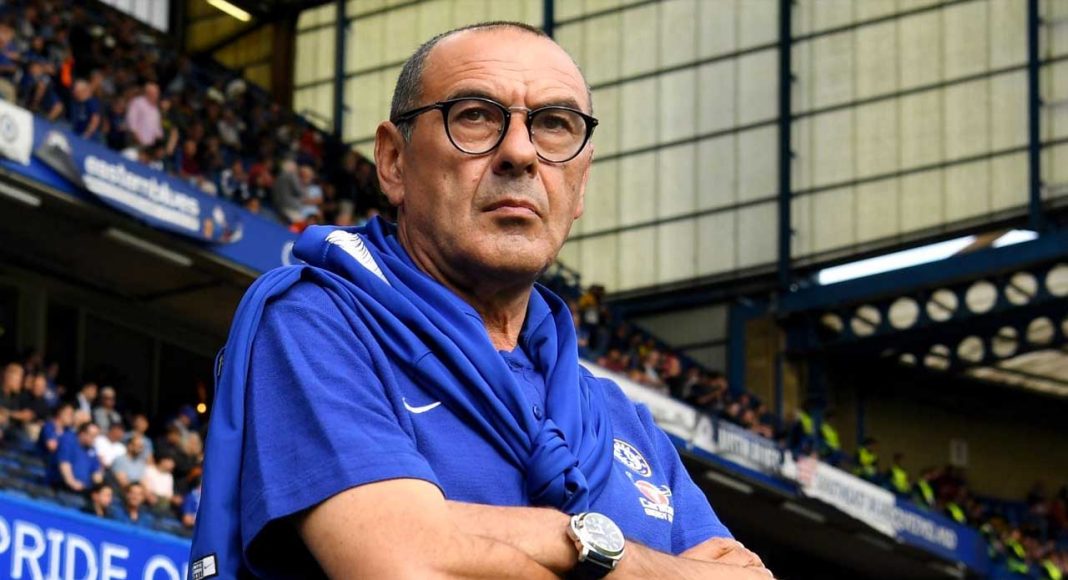 There’s another new dawn at Chelsea. The Maurizio Sarri era has begun – and the latest coach has a major job on his hands. It all went a bit stale around Stamford Bridge last season as Antonio Conte lost his way, and ultimately paid the price by departing the club in the summer.

But, what does Sarri need to do to transform Chelsea from the team that failed to mount even a token defence of the league title Conte won in 2016-17 – trailing 30 points behind champions Manchester City last season – to one that can challenge again?

There’s a term for Sarri’s tactics and the methods he uses to set his teams up – Sarriball. The basics of those tactics are detailed in this excellent piece by Goal; a transition from the defensive set-up favoured by Conte to a more attacking, high-pressing one deployed by Sarri.

It’s still early days but we’ve already seen those changes in the Chelsea team and style. Conte’s three-man central defensive line-up and wing-backs are out – Sarri’s 4-3-3 is in. This means Cesar Azpilicueta has been restored to his more conventional right-back position, from where he can more fully utilise his excellent distribution skills.

We all know Azpi can cross a ball as well as anyone in the Chelsea squad though of the two regular full-backs it’s Marcos Alonso who is probably going to get forward more often – as we saw when he galloped up to score the winner against Arsenal.

Sarri has already re-shaped the Chelsea midfield, with a new role for N’Golo Kante. The signing of Jorginho has been the catalyst for this new set-up. The Italian sits at the heart of the Blues midfield as a deep-lying playmaker, dictating the flow of a game and content to make simple pass after simple pass. Kante has therefore shifted over to a right centre midfield role in Sarri’s 4-3-3.

Fair play to the coach for quickly identifying that Kante has more to his game than simply winning the ball in the centre of midfield and making a pass.

The Frenchman has seemingly never-ending energy and Sarri has already sussed that he can make a great impact pressing the opposition higher up the pitch and disrupting rival midfielders. Of course, Kante scored the opening goal against Huddersfield and a goal from N’Golo might not be such a rare sight this season.

What’s becoming clear already, just a few games into the season, is that Sarri’s Chelsea love having the football. In certain fixtures, and on certain occasions, Conte’s team would be content to stay in a defensive shape, absorb pressure, and hit opponents on the counter.

It’s not surprising that Chelsea completed 658 passes at Huddersfield – even as the away team you’d expect us to have more of the ball in that game. But against Arsenal? The Blues made 720 passes and enjoyed over 60% of possession. We’re not used to seeing such dominance against an opponent that has traditionally has a lot of the ball.

Even against Man City in the Community Shield, the passing stats were pretty similar. Chelsea made 523 passes against City’s 584. Maybe Sarri will give Guardiola a run for his money when it comes to stylistic merit this season.

So far, we’ve seen Willian and Pedro in the wide attacking roles, flitting from outside midfield positions to more advanced slots when Chelsea are on the front foot. The Sarri template seems fairly clear, but there is still a big question to answer. Or two.

Where does Eden Hazard fit in to all this?

And is Alvaro Morata goal scorer Plan A?

Morata had a mixed time in his debut season – a fast start tailed off and he struggled badly from winter onwards. He’s started the 2018-19 campaign encouragingly, even if his reported goal target looks super ambitious. We can expect Olivier Giroud to challenge for that position. But there’s also another theory – Hazard’s future role, under Sarri, may be as a deep-lying forward. Yes, that ‘false nine’ that has become fashionable in recent years. When at Napoli, Sarri successfully transitioned Dries Mertens into a forward and it’s easy to see Hazard, an overall more talented footballer, doing the same.

It’s going to be fascinating to see what Sarri is going to do with this Chelsea squad, but early performances suggest it’s going to be an enjoyable ride. Some of those Chelsea players already look like they’re benefiting from a new lease of life. Sarri is like a breath of fresh air.