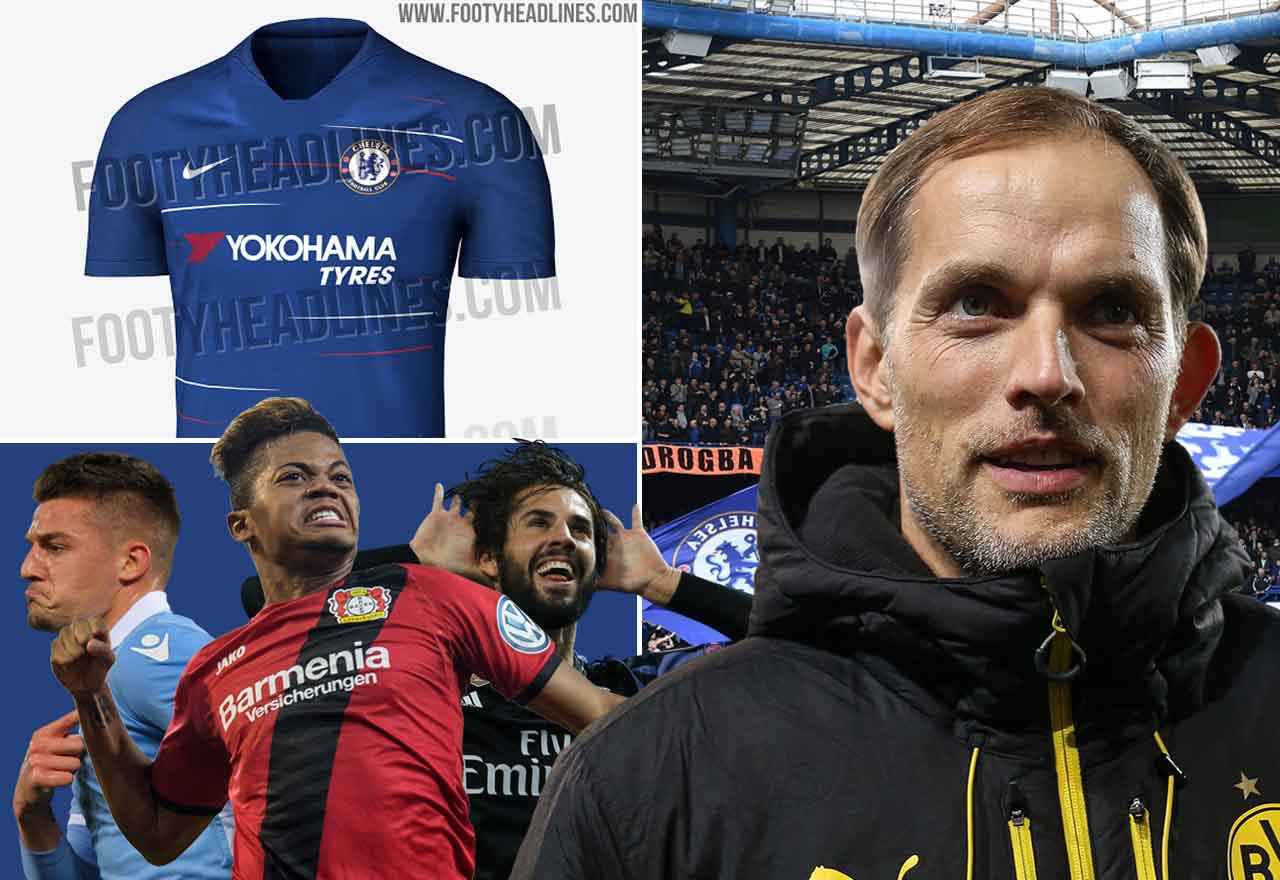 Antonio Conte’s men are still very much competing in the race for the top four, as well as having an FA Cup semi-final at Wembley to look forward to. However, this season has been a tale of defensive inadequacy and offensive ineffectiveness.

It’s for that reason that we find ourselves in this position. Title surrendered to Manchester City. Knocked out of the Champions League by the vastly superior Barcelona. Desperately clinging on to feint hopes of finishing inside the top four.

Wholesale changes are needed in the summer, both on the pitch and in the dugout. TalkChelsea have considered how Chelsea could look next season. Do you agree with our predictions? As Football London report, reliable German journalist Rafa Honigstein has claimed that Chelsea held talks with Tuchel over the possibility of him replacing Antonio Conte. Honigstein claims that the influential Marina Granovskaia was impressed by the former Borussia Dortmund boss.

Tuchel would bring fresh ideas and almost unparalleled tactical understanding to a lacklustre and stagnating squad. He could be exactly the injection of life that Chelsea need to keep pace with Manchester City at the top of the Premier League.

Chelsea have experimented with both 3-4-3 and 3-5-2 during Conte’s reign. The former worked fantastically at first, but it’s time for change.

During his time at Dortmund, Tuchel used a 4-2-3-1 formation. We expect that he would do the same at Stamford Bridge. “I feel at ease, knowing that I will still be at Chelsea next year.” – Quote via ESPN

Unless Thibaut Courtois has been practicing his poker face in the mirror, he’ll still be a Chelsea player next season. Willy Caballero has proven himself to be a more than adequate deputy, perhaps the best in the league, but Courtois is a superstar keeper – he needs to start between the sticks. César Azpilicueta has had a superb couple of seasons as a right-centre-back, but the time may have come to put him back where he belongs.

Azpilicueta is right in the midst of his prime years and should be playing in his strongest position. No defender has provided more assists in the Premier League this season than the Spaniard. He’ll have further opportunities to whip in a cross if he’s playing as a full-back. Gary Cahill and David Luiz’s best days as Chelsea players are in the past. The pair inspired Chelsea to victory in Munich – but that was six years ago.

Antonio Rudiger is 25-years-old and will only get better. The German has grown into this campaign, having looked unconfident and sloppy early on. One of the first names on the team-sheet., Andreas Christensen’s meteoric rise from forgotten loanee to regular starter has been one of the silver linings of a difficult campaign.

Christensen has allowed a few errors to sneak into his game in recent weeks, that is likely due to this being the most physically demanding season of the Dane’s career.

As The Sun report, he was sent home by Age Hareide, manager of the Denmark national team, after being deemed unfit to feature for his country.

After a good rest after the World Cup, he’ll be ready to go again next time around. Here’s one that may raise a few eyebrows – no Marcos Alonso?

The Spaniard has been excellent for Chelsea under Conte’s stewardship. However, he fits like a glove into a left-wing-back role, that’s not necessarily the case at left-back.

Now could be the time for Palmieri to show exactly why Chelsea opted to sign him in January. After his first full pre-season as a Chelsea player, it’s safe to say he won’t be going to Russia. Next season could be the Brazilian’s chance to show us what he’s capable of. No surprises here, Kanté has been phenomenal once again this season, even with his midfield partners struggling to impress alongside him.

Kanté has signed and sealed his world-class status. Assuming one of the European heavyweights don’t launch a £100M+ move for him in the summer, he’ll be holding our midfield once again next season.

The Daily Mail reported in December that Chelsea sent scouts to watch Milinković-Savić in action for Lazio. They will likely have been impressed with what they saw, the Serb is having a stellar campaign.

Milinković-Savić would be able to provide us with quality and forward-thinking in the midfield that we currently lack, and could (finally) be the perfect midfield partner to compliment Kante. It was reported during the January transfer window by the London Evening Standard that Chelsea were preparing a move for Bayer Leverkusen winger Leon Bailey.

We’re not suggesting that we should ditch our pursuit of the Jamaican, but Willian’s electric form has lessened the need to sign a new winger.

Since the turn of the year, Willian has been head and shoulders above the rest of the squad – even Eden Hazard.

If he is able to sustain this performance level, he will nail down a spot in Chelsea’s starting eleven for good. Isco sent a message to any potential suitors on Tuesday night by bagging a hat-trick against Argentina. He has been rotated in and out of Zinedine Zidane’s starting eleven while the Frenchman has held the reins at the Santiago Bernabeu, and ought to depart in order to further his career.

According to Spanish publication Diario Gol, reigning Premier League champions Chelsea and champions-elect Manchester City are set to go head-to-head in the race to land Isco.

We ought to do everything in our power to sign him. He’s a phenom, and the prospect of him playing in between Willian and Eden Hazard is utterly mouthwatering. They ought to look elsewhere, because he’s ours.

Hazard has been influential in two Premier League title triumphs during his time as a Chelsea player. If we want to get back up from the knockdowns we’ve endured this season, we need the Belgian to be at his best.

He’s one of the best players in the world, and even if we can’t provide him with Champions League football, we need to do everything in our power to make sure he stays put. Michy Batshuayi has scored eight goals in 11 appearances out on-loan at Borussia Dortmund. Whenever the Belgian hitman has been provided with a platform to impress, he has taken full advantage.

Alvaro Morata is some way off being able to cope with the physical demands of life in the Premier League. Batshuayi is far more suited to the football in this country, and ought to be given a chance to lead our line. We expect Gary Cahill to continue to be relegated to the substitutes bench, while David Luiz may not have a future at the club. Ruben Loftus-Cheek will return from his loan at Crystal Palace a far more accomplished player, while Cesc Fabregas will continue in his role as somewhat of an impact substitute.

We cited the London Evening Standard’s report about our interest in Bailey earlier in the article. We’d like to see us act on that interest, regardless of the form of Willian or if Hazard stays put.

We also believe that a spell among the substitutes may do Morata some good. Let him battle with Batshuayi for minutes on the pitch. When it comes to releasing details of upcoming kit releases before anyone else, there’s no better source than Footy Headlines.

The picture above was is a ‘leaked’ image that was shared by Footy Headlines back in January. It’ll be the second kit that Nike have ever manufactured for us, and is noticeably dissimilar to anything we’ve ever worn do to the red and white horizontal stripes.

What do you think, Blues? Have we got the team right? Is Tuchel the right man to take us forward? Will you be getting Isco, Milinković-Savić or Bailey printed on the back of that gorgeous new strip? Let us know in the comments.

we must sign milankovic,isco,icardi,myresh or bailey then bring back Marco van ginkel,zouma from loans then we should release Cahill,bakayoko,Pedro and give Barkley&Drinkwater to shine remember it wasn’t their happiness for them to be injured and not unavailable…remember their comprise our English players role.

I think everything as predicted is awesome… I however believe Mario Icardi will do us good as our striker… Michy is good though but we need someone better than him! Talk of Morata, I think he should provide us with the money to go for Icardi

All good except Cahil. He should be out and Luiz should stay.

Alonzo or Rudiger must play d Left Back .Koulibaly must play the main Centre Back .Icardi will have to be our new Striker

Where it went wrong for Chelsea this season
Chelsea Class Report: Grading stars on this season’s performances