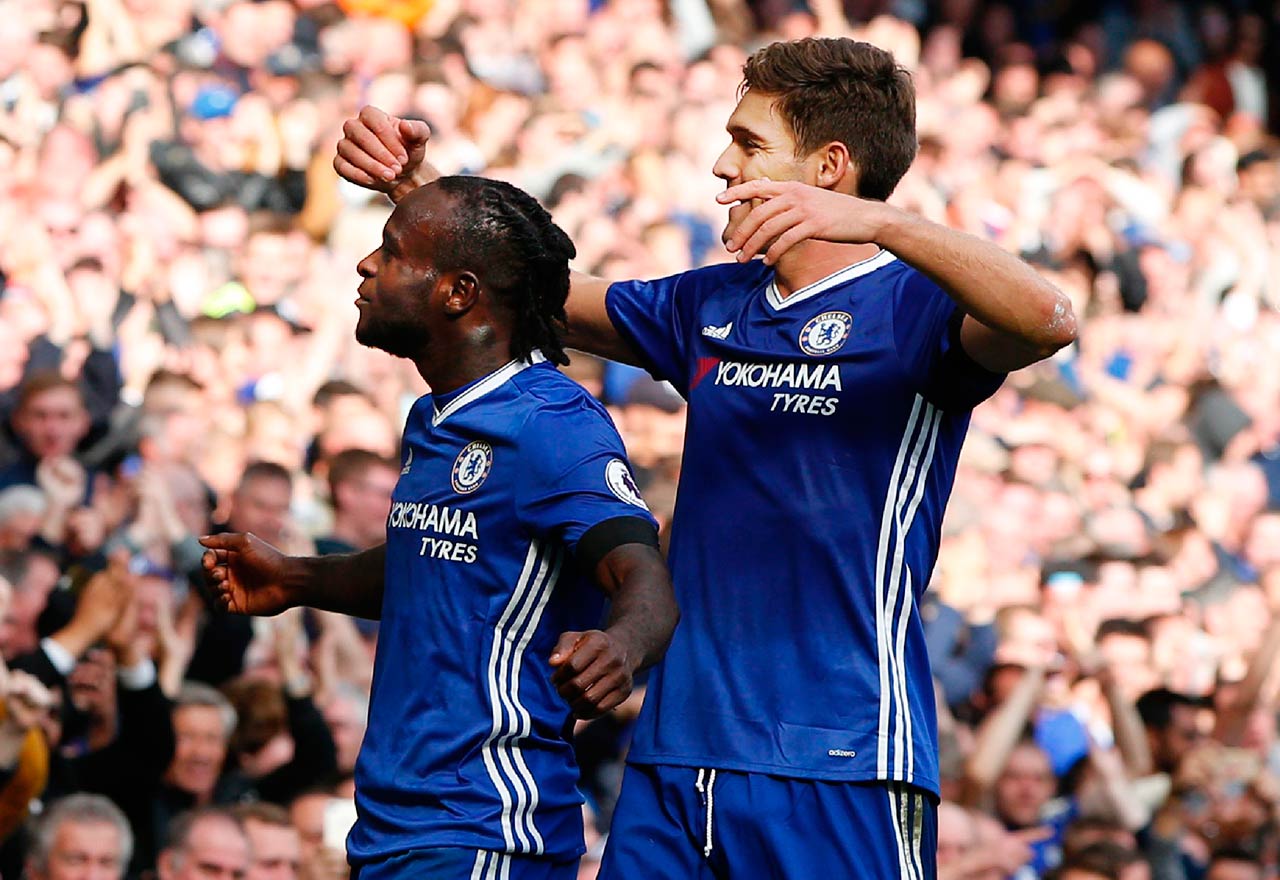 Chelsea manager Antonio Conte has played a pivotal role in the rise of Victor Moses and Marcos Alonso. His conversion to the 3-4-3 formation has provided the perfect platform for them to rise from the bottom to the very top of the game.

At the beginning of the season, Victor Moses was linked with various moves away due to his failure to make an impact at Stamford Bridge. Since joining the blues in August 2012, the Nigerian international has endured underwhelming loan spells at Liverpool, Stoke City and West Ham United.

At the end of last season, Slavan Bilic rejected the opportunity to sign Moses on a permanent basis. Fast forward one year and he is one the verge of winning his first ever Premier League title.

The 26-year-old has been transformed into a regular starter for Chelsea this season in the right-wing back position. He’s made 27 Premier League appearances and also featured in their record-equalling 13-match league winning streak between October 2016 to January 2017.

In 2014, Marcos Alonso was playing for Sunderland as they were engulfed in a massive relegation brawl. He helped guide them to safety from a practically impossible position and enjoyed two successful years at Fiorentina, following his loan spell on Tyne-Wear. This was the revival and the beginning of Alonso’s rise to the very top of the game. Conte acknowledged the ability possessed by the Spaniard and signed him from Fiorentina for a fee of around £24 million last summer.

The former Bolton Wanderers left-back has made 28 appearances and scored 5 goals in all competitions for Chelsea this season. It’s unlikely that Alonso will eclipse the achievements of his grandfather, who won 5 European Cups with Real Madrid, but he’s set to follow in his relatives’ footsteps.

Chelsea suffered back-to-back league defeats to Liverpool and Arsenal in September 2016. Conte had enjoyed a relatively promising start to his Chelsea career up until this point in the season and he demonstrated his true genius to switch formations and change the blues’ fortunes.

He’d played a 3-4-3 formation with Juventus and the Italian National Team, but conceded that his decision to switch formations was his plan B. However, his risky and gutsy decision paid off as Chelsea enjoyed a 13-match winning streak and currently top the Premier League table by four points.

The Italian resigned David Luiz from Paris Saint-Germain in the summer, which fuelled the majority of Chelsea supporters with anger. Another strange signing emerged from the press when former Bolton Wanderers and Sunderland full-back Marcos Alonso signed from Serie A side Fiorentina.

However, these peculiar and purely insane signings have turned out to be a stroke of genius in hindsight. Chelsea were also expected to clear out various players, who endured poor seasons under Mourinho and Hiddink.

Instead, he inspired players such as Diego Costa, Cesar Azpilicueta, Eden Hazard and Nemanja Matic to revive their careers at Stamford Bridge. Each of those four players have repaid Conte for his faith in them and have adapted to his new 3-4-3 formation admirably.

They are also given more license to attack due to the presence of N’Golo Kante, who’s work ethic and contributions provide another barrier of defence. Thanks to Kante and also Matic, Moses and Alonso can enjoy more involvement in the final third.

Due to both wing-backs providing attacking threats down the flanks, Hazard and Pedro play free roaming roles in central attacking positions. Moses and Alonso have regularly linked up with the two more advanced attacking players by making overlapping runs.

The duo’s quick pace also makes the opposition vulnerable to counter-attacks, as they have the ability to bring the ball forward and spark quick attacks. Diego Costa has been fed from various sources to accumulate 17 Premier League goals this season.

Moses and Alonso deliver crosses into the heart of the penalty area for the Brazilian-turned-Spaniard striker and Hazard and Pedro thread through balls to assist Diego Costa.

Antonio Conte has revived the careers of two promising stars, after they were slowly fading into the background of the top level of professional football.

Marcos Alonso, who started his career with Real Madrid, suffered relegation with Bolton Wanderers at the end of the 2011/12 season. The Spaniard, whose grandfather and father enjoyed success in Spain, is now on the verge of winning his first ever Premier League title.

Victor Moses exploded onto the scene with Crystal Palace in the Championship and further progressed his career with Wigan Athletic in the Premier League. The 25-year-old was set to fade into the background, like many other players who’ve joined bigger clubs in the past. After various rumours linking him with moves away from Stamford Bridge, the Nigerian has emerged from under the radar to play a pivotal role in Chelsea’s title race. Conte, the mad genius, has proved his critics wrong and formed one of the oddest and most fantastic teams in the Premier League.

My name is George Bennett, I'm 19-years-old and live in Wiltshire. I'm an aspiring sports journalist, with football at heart and I currently write for Talk Chelsea. I also have my own blog called GB Articles and regularly podcast on my You Tube page, which is included on my social media links.

Are Chelsea quavering under the pressure?
Chelsea’s three best players in the Premier League this season