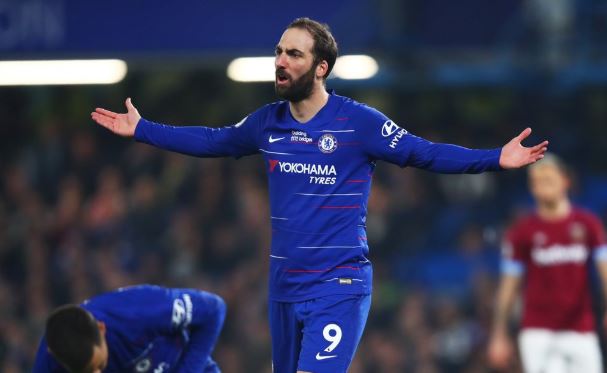 Gonzalo Higuain was one of the players Maurizio Sarri brought back into the starting lineup last night, in the hope that once again events would line up well for him to get back scoring again.

A home fixture, a defensively shaky opposition without much to play for. It all looked to be set up nicely for the Argentine.

Instead, he played so badly that he may well have excluded himself from Maurizio Sarri’s first team plans for the rest of the season, barring any major incidents.

He looked as slow and sluggish as he has in most games since arriving in January, and even worse, his linkup play was sloppy too. On several notable occasions his short layoffs didn’t find their target, breaking down promising attacks just as they approached the Hammers’ goal.

He was lucky to have Eden Hazard in his team to bail him out with a superb brace. But the stats don’t like, and Hazard links up far better with Olivier Giroud than with the January signing. And in the interest of getting his best players to play at their best, Sarri will surely have to stick with the World Cup winner for the big games from hereon out.

Have to agree, he was very poor. Any striker worth his salt will get 2 maybe 3 decent chances in a game, and stick 1 or 2 away. Higuain couldnt hit water if he fell out of a boat. Very poor after a decent start. Bring back Mitchy, recall Tammy… Read more »