Talk Chelsea
Home Opinions Maurizio Sarri admits Chelsea are lacking in one area, a look at... 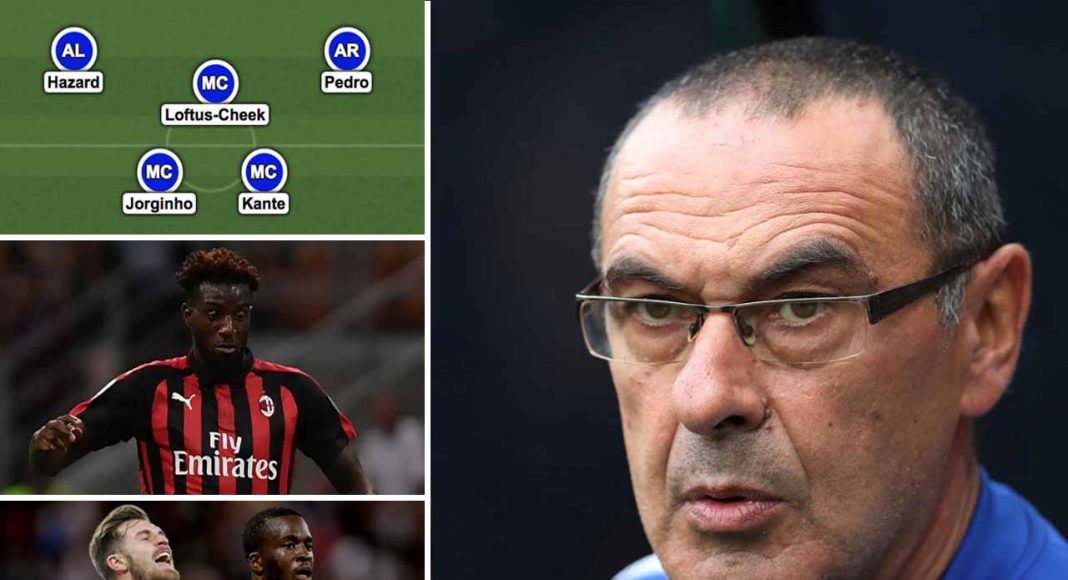 Maurizio Sarri has revealed that there is an area of his squad which he believes Chelsea are lacking, and we’ve looked at three ways that he could solve this problem.

It’s no secret that Sarri is not entirely content with the squad of players he has at his disposal. Why would he be? The vast majority of them were signed under Jose Mourinho and Antonio Conte, two managers with completely different philosophies.

Sarri could certainly do with a new striker, perhaps another winger, too, but there’s no concrete suggestion that we will pursue either this winter. He has, however, publicly revealed his distaste at Chelsea’s options in midfield.

It’s not something that we’d noticed before, we felt that our midfield was an area of strength, but Sarri is right, there’s not a great deal of variety for him to select from.

N’Golo Kante is the only midfielder we have who excels in the defensive phase, and even he is being fielded out of his usual position. The rest are forward-thinking, which isn’t practical.

With January on the horizon, Chelsea could utilise the transfer market to plug this whole in Sarri’s squad, but it’s certainly not the only potential solution. This is perhaps the least likely route for Sarri to go down. He is notoriously stubborn when it comes to his system. That’s a common characteristic of the modern manager, they don’t believe in plan B’s, they focus on making their plan A successful.

However, if Sarri does deem his squad unsuitable for his system and is looking for a short-term fix – why not use a pivot? The prospect of Jorginho alongside N’Golo Kante deep in the midfield is something that we’d be enthusiastic about.

Jorginho can play the role of the distributor, while Kante will be moved back into the position which saw him hailed as one of the best midfielders in the world. What’s not to like?

Well, it doesn’t really solve the initial problem. We would still not have a natural alternative to Kante, other than fielding David Luiz in a holding role, which certainly wouldn’t be ideal.

Chelsea have a grand total of 40 players out on-loan, but having a look through the list, there’s just the one player who would be suitable for what Sarri is looking for – Tiemoue Bakayoko.

Chelsea fans are probably still having nightmares following Bakayoko’s dreadful performances last season, but he has earned a second chance with a recent resurgence with AC Milan.

Though he initially struggled at the San Siro, the manner in which Bakayoko has reignited his career with the Rossoneri over the past couple of months has been commendable.

The Frenchman is now an incredibly important player for Milan, as he could be for Chelsea if given a sufficient opportunity, under the guidance of the right manager.

It’s unclear whether there was a recall clause included in the deal that took him to Milan in the summer, but if there is, it’s certainly an option that Chelsea shouldn’t be ruling out.

Looking to the transfer market is always a viable option, especially for a club like Chelsea. If we are at risk of missing out on Champions League qualification midway through the month, the board may see it as worthwhile to release funds for Sarri to spend.

The question is – who would we pursue?

21-year-old Lyon midfielder Tanguy Ndombele would fit like a glove. As ESPN report, his agent has recently revealed that the Ligue 1 giants would be prepared to let him go for €80M. A hefty price, but a worthy investment if he fulfills his potential.

Aaron Ramsey’s Arsenal contract also comes to an end at the end of the season. He is free to speak to clubs this January meaning we could secure a pre-contract agreement to sign him in the summer without paying a penny.

There’s plenty of options for us to explore on the transfer market, but it should be considered a last resort. Too often we’ve used transfers as a quick-fix which haven’t paid off long-term. Let’s learn from our mistakes.

Which do you think is the best course of action, Blues? Let us know your thoughts both in the comments and on Twitter @TalkChelsea.

Here’s a solution. Sarri’s play includes a possession-based quick passing football. The team should line up something like this – Kepa, Azpilicueta (best defender in our squad), Luiz (distribution from the back), Rudiger (the centre back), Palmeiri (Alonso’s passing is dreadful), Kante (let him do the defending), Jorginho (let him… Read more »

Would you consider Loftus Cheek as the front man? He has speed, strength and skill plus an eye for goal.

Or he could just play Ampadu. Unfortunately he seems to be afraid of playing the youngsters.