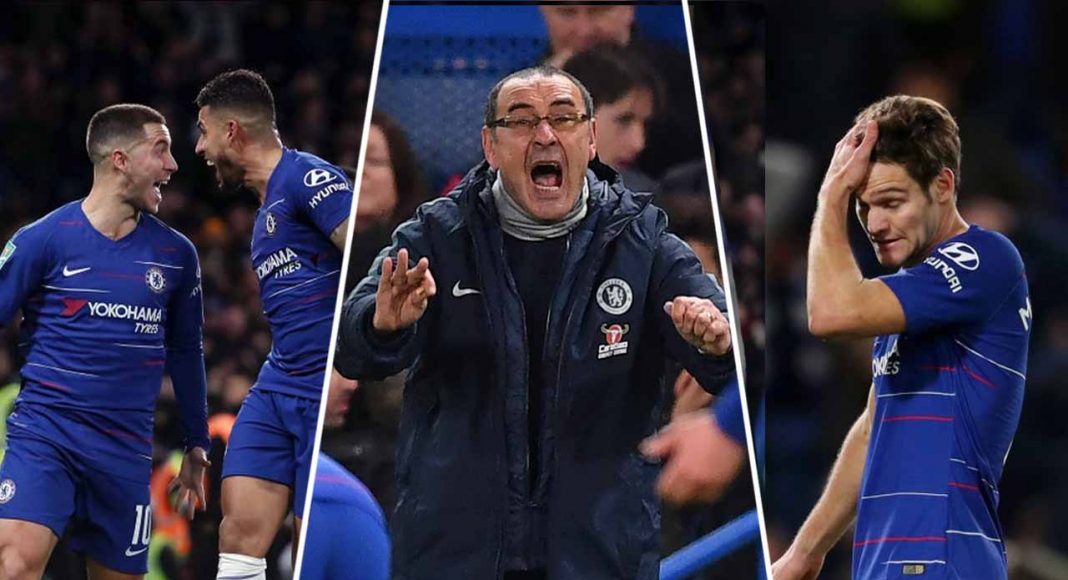 Maurizio Sarri may well be in his debut season as Chelsea manager, but it’s impossible to rule out the possibility of it being his last.

Roman Abramovich is renown for his cut-throat tendencies when it comes to sacking managers. If he feels that a change is needed, he won’t hesitate, he will spring into action and swing the axe.

Sarri is some way off suffering the same fate as many of his predecessors, but if his tactical stubbornness doesn’t subside, his head may well be next on the chopping block.

Here’s three reasons why Sarri could face the sack within the first year of his appointment, and some advice on how he can prolong his stay at Stamford Bridge.

In Eden Hazard and N’Golo Kante, Sarri has two of the best players on the planet. Yet, he has felt it appropriate to field them both out of position.

Kante has been planted in a more advanced role this season. With Leicester City, Chelsea and France he excelled while holding the midfield – why would Sarri disrupt the equilibrium?

Hazard has also been enjoying the most productive season of his Chelsea career to date out on his beloved left-wing. In recent matches, however, Sarri has used him as a false 9.

Hazard is most effective when he is able to isolate his opposing full-back 1-on-1 out-wide. As shown during our defeat to Leicester, this new role leaves him isolated. He’s not Dries Mertens, Sarri needs to stop pretending that he is.

We understand that Kante in particular is not the breed of footballer that Sarri wants to distribute from the heart of his midfield, but he’s good enough a player for the Italian to tinker with his system.

It feels as though many of our recent troubles stem from Sarri’s reluctance to make tactical alterations. He is subsequently wasting what are supposed to be the prime years of Kante’s career.

As for Hazard, we fear where we’d be without him this season, so Maurizio ought to be doing everything he can to get the best out of him and satisfy his desires. There are certain players being included in Sarri’s starting eleven, week-in, week-out, who don’t deserve to be given such a degree of faith by the manager.

Willian and Marcos Alonso are the two which spring to mind. Both have been mainstays in the Chelsea side over the past few of seasons, and that’s the only reason we can think of that Sarri is continuing to select them.

Both have been utterly dreadful in recent weeks, and Sarri continues to field them. They won’t learn their lesson and find motivation to improve unless their starting spots become under threat.

Not only does it send a negative message to the players themselves if they can put in substandard performances and continue to start, but it’s also an insult to both Callum Hudson-Odoi and Emerson Palmieri.

The pair have impressed at every opportunity this term, but it hasn’t been enough to prevent Sarri from overlooking them. How he can expect the results to change if the personnel remains unchanged is beyond our understanding. Chelsea keep imploding midway through games which we were dominating throughout the opening stages. It’s a bemusement to us, but we don’t get paid the big-bucks, Sarri does, and he has no idea what’s going wrong either.

“I really don’t know what happened” – (via Sky Sports, after losing to Wolves)

“I don’t know why these reactions happen” (via the Mercury, after losing to Leicester)

It’s Sarri’s responsibility to understand why his players are deviating from his plans and to solve the problems which exist within the team. Publicly revealing that he hasn’t got a Scooby-Doo what’s happening isn’t going to do him any favours.

Us fans have a great deal of faith in Sarri, but that won’t last if this post-match puzzlement continues throughout the course of the season. He is supposed to be the man to give Chelsea a reboot, but how can he if he doesn’t know the root of the problems?

Sarri’s Chelsea career is hardly a ticking time bomb, but we refuse to blindly follow a manager if we are not in agreement with many of the decisions they are making.

Though the squad Sarri has inherited is not tailored for his style of play, he should be making adjustments accordingly or we have no hope of getting back in the Champions League.

The Chelsea board will not be satisfied with another fifth-place finish, nor will the fans. If we are unable to find some consistency, that’s what we’re headed towards, and it could cut Sarri’s time as Chelsea manager short.

It took Pep Guardiola a season to turn Manchester City into arguably the greatest team the Premier League has ever seen, but the City faithful were given glimpses of what they could become throughout his first season at the Etihad. That’s what we’re waiting for under Sarri.

agree totally with these points Willian last 10 games has been below par, thought it was Barca tapping him up affected him. Sarri’s stubbornness could be his downfall. Alot his tactical prowess seems to be in Jorginho playing a pivotal role and this seems to be now backfiring. Maybe in… Read more »

well, I say this is total nonsense… a narrow minded view… eauivalent to saying a player can never be more than he is… he should not seek to improve himself and become a far superior player than he currently is. When we are winning kante is brilliant, Hazard is a… Read more »

might explain coaching for 20 years and not won a trophy !!

it seems from the comments he has made “like he doesnt know why its happening ” is more aligned to a coach comments rather than a manager maybe at this level he should be coaching and not managing !

He’s the head coach by the way!

Totally agree, he is no different to conte, all possession but no end product, substitutions are always like for like, if we need goals in last 30 minutes why not try 2 strikers with 2 wingers, and only 2 in midfield, get some crosses into the box, and why always… Read more »

Fully agree. I have a number of points to make. Kante and Hazard are being misused. Jorginho is a waste of space. Fabregas is a playmaker. Jorginho does not pass the ball, he gets rid of it. Alonso is a brilliant wing back but not such a good full back.… Read more »

Previous articleChelsea have made inconceivable £85M bid, according to you-know-who
Next articleMaurizio Sarri admits Chelsea are lacking in one area, a look at potential solutions

TalkChelsea is strictly for informational and entertainment purposes. Our website is no way connected or affiliated with Chelsea Football Club or any other related fan sites. The views and opinions expressed here are in no way representative of Chelsea Football Club. All images on this website are the property of their respective owners.
© 2020 Talk Chelsea | Design by James Porter | Hosting by RackSRV
wpDiscuz
9
0
Would love your thoughts, please comment.x
()
x
| Reply
MORE STORIES