Leicester City striker Jamie Vardy has dropped a major hint on his Instagram page that he would be keen to join Premier League champions Chelsea.

Vardy’s rags to riches story is a modern football fairytale. Just a few years ago he was playing non-league football, he now has a Premier League winners medal to his name and is likely to fly to Russia with England for the World Cup in the summer.

His combative style and fiery mentality are comparable to former Blue Diego Costa. Costa was a fan favourite during his time at Stamford Bridge and was nicknamed ‘The Guvnor’ by the fans.

Alvaro Morata lacks that edge to his game that both Vardy and Costa possess, and we have suffered through the lack of it so far this term.

Antonio Conte himself appears to be a big admirer of Vardy. Ahead of our clash with Leicester City earlier this month, the Italian was quoted by the London Evening Standard singing the praises of the Foxes’ centre-forward:

“I appreciate a lot this player because he is a really good player. He played for the national team and is scoring with regularity in this league and is a good player.”

If Conte does have any interest in signing Vardy, he may well have just been offered significant encouragement by the man himself. Having posted a photo on his Instagram account, Vardy was bombarded with messages asking him to join Chelsea. One of which, he ‘liked’. 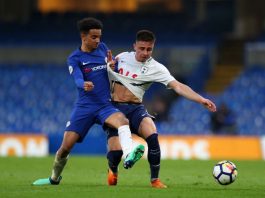