Guus Hiddink and the team will be crossing borders as they travel to the Liberty Stadium to play Swansea hoping to extend their unbeaten run in the Premier League to 16.

With 7 games remaining in this Premier League season, motivation will be key for the away team. Chelsea currently sits 10th in the league, 7 points and 6 teams between them and a spot in Europa League. While it is mathematically possible, it is highly unlikely that all 6 teams above are going to drop the points needed. Pride should be what drives the older and more experienced players.

Hiddink has also stated he will be trying to play more youngsters in the remaining matches, who should not struggle to find motivation in their chance at showing the fans what they can do.

Swansea sit three places and 10 points above the drop zone, with some teams below having a game in hand, they are not entirely safe. The next few games will be crucial for where they will be next season.

Diego Costa will be serving his third match ban of three after improper conduct in the FA Cup against Everton.

Guss Hiddink reported that that John Terry, Nemanja Matic and Loic Remy will miss the match through injury.

Garry Cahill trained yesterday and will need a test to see if he can play against Swansea. 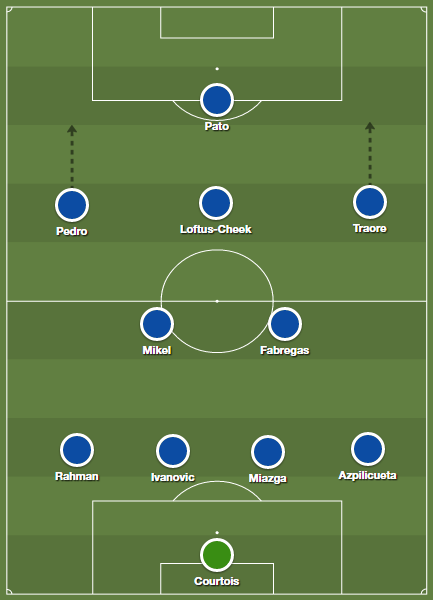 Chelsea won 5-0 in this exact fixture last season, their biggest away win over Swansea in any competition.

Chelsea are looking to keep a fourth consecutive clean sheet at the Liberty Stadium (in all competitions).

Diego Costa has scored more goals against Swansea City than any other Premier League side (5).

Chelsea are unbeaten on their five trips to Wales in the Premier League, winning the last three (two wins, two draws v Swansea and one win v Cardiff).

Over his two spells as Chelsea boss, Guus Hiddink has averaged 2.22 points per game, a better average than Jose Mourinho (2.19) and inferior only to Avram Grant’s 2.31 figure (min 20 games).

Swansea’s last five home league games have produced a total of just six goals, with no side scoring more than once in any of those fixtures.

Chelsea are enjoying the longest unbeaten run of any team in the Premier League this season, going 15 games without a loss (W7 D8).

Swans’ playmaker Gylfi Sigurdsson (10) is the first Icelandic player to score 10+ goals in a Premier League season since Eidur Gudjohnsen in 2004/05 (12).

Swansea have shipped a league-high four own-goals this season.

I am always hesitant to predict a Chelsea win, especially when the other team has more to play for, but Chelsea after a dominating display against Aston Villa and the fear of Manchester City next weekend, I cant see past Chelsea taking the 3 points.