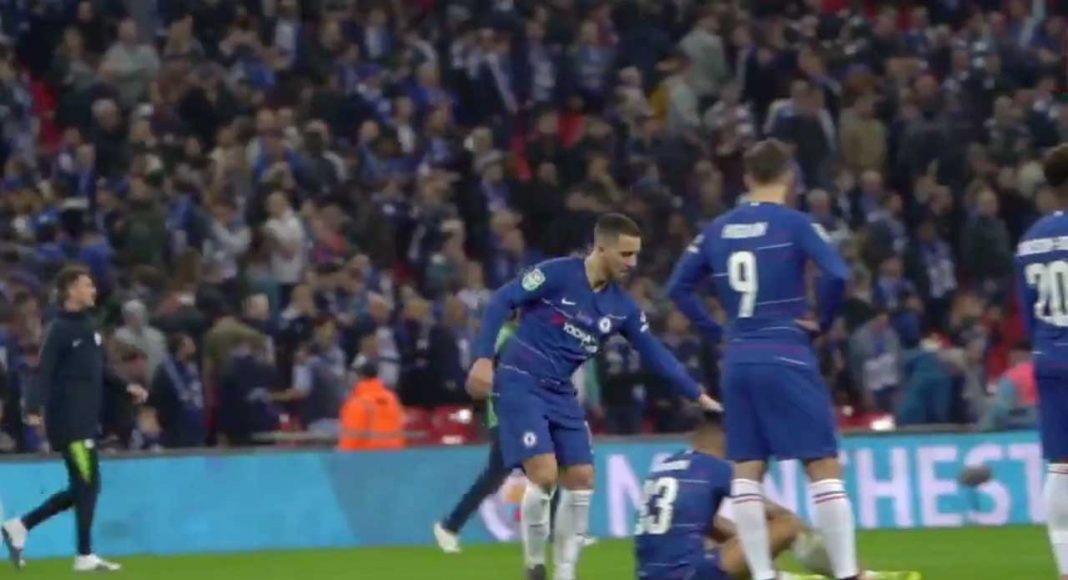 A clip of Eden Hazard displaying his captain’s credentials following the loss to Manchester City has been doing the rounds on Chelsea Twitter.

Chelsea fans have been quick to criticise Cesar Azpilicueta for his lack of intervention during Kepa Arrizabalaga’s feud with Maurizio Sarri at Wembley. Azpilicueta knows Kepa well and speaks his native tongue, yet made no attempt to get through to him.

It is a harsh criticism of our captain, who in his defence was on the opposite end of the field, but the situation lasted over two minutes. He had plenty of time to escort Kepa to the sidelines if he wished – yet he chose to keep his distance.

Azpilicueta is yet to even be confirmed as Chelsea’s full-time captain, which could be an indication that Sarri has merely given the armband to him on a trial basis, or perhaps he just doesn’t see any real significance in having an captain.

Either way, question marks have been raised over Azpi’s credentials – and Chelsea fans believe they have found the perfect candidate. As Raheem Sterling fired home the winning penalty at Wembley, Hazard was the first to go round consoling his teammates.

This is great to see from Eden. There have been claims that Chelsea lack natural leaders, but we have had one under our noses the whole time. If Hazard does choose to stay and commit to a new contract, we wouldn’t be against him being made captain.

Previous articleMaurizio Sarri explains Chelsea scapegoat’s omission – could continue vs. Spurs
Next articleChelsea legend John Terry gives Maurizio Sarri some advice he ought to listen to