Chelsea will be looking to bounce back after a disappointing trip to Wales and take advantage of tired legs as Man City visit Stamford bridge.

The last time Chelsea met City was in the FA Cup where an impressive Chelsea team beat a young team from Manchester 5-1. This game will not be as easy with players such as Aguero, De Bruyne and Silva expected to be part of the game this time around.

This game will be the first time Kevin De Bruyne returns to Stamford Bridge since leaving on poor terms to Wolfsburg in January 2014. De Bruyne, to the annoyance of Chelsea fans, has been a revelation since joining City for a high price, with 16 goals and 16 assists this season already.

Manchester City can feel the breath of West Ham and rivals Manchester United down the backs of their necks as they look to secure fourth spot. Chelsea meanwhile no longer have nothing to play for, as shown last week as many players look like they are on holiday.

To the delight of Chelsea fans Diego Costa has finished his three-match suspension. He returns to be selected to the side with now match fit Nemanja Matic and Garry Cahill. Unfortunately captain John Terry, along with Eden Hazard and Loic Remy, remain unavailable through lack of fitness.

Kompany and Sterling are both close to returning but are unlikely to be risked with two matches against Real Madrid on the horizon.

Chelsea have won 11 and lost just one of their last 17 Premier League games against Manchester City at Stamford Bridge.

Chelsea have won just one of their last seven Premier League home games, drawing the other six.

Indeed, the last time Chelsea conceded in 10 consecutive top-flight home games was between April and November 1970.

Manuel Pellegrini’s side have lost just one of their last seven Premier League away matches (W3 D3 L1).

Chelsea have scored only five goals in their last seven Premier League games against Manchester City.

Chelsea have now lost 10 Premier League games this season – more than in 2014-15 and 2013-14 combined (9).
Guus Hiddink has not lost two league games in a row as a club manager since February 2004 whilst at PSV Eindhoven.

Despite appearing in just 21 of Man City’s 32 Premier League games this season, Kevin De Bruyne has created more chances than any other player in their squad (69). 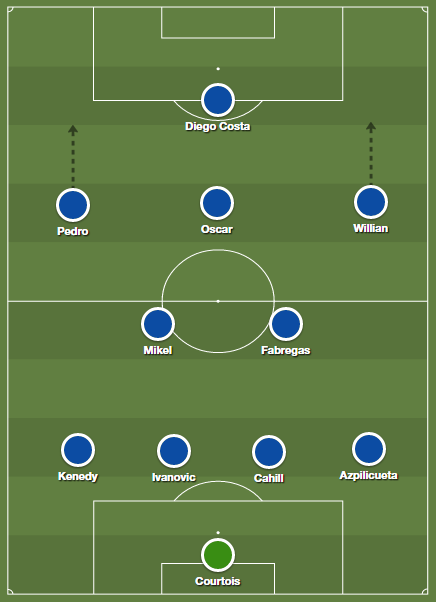