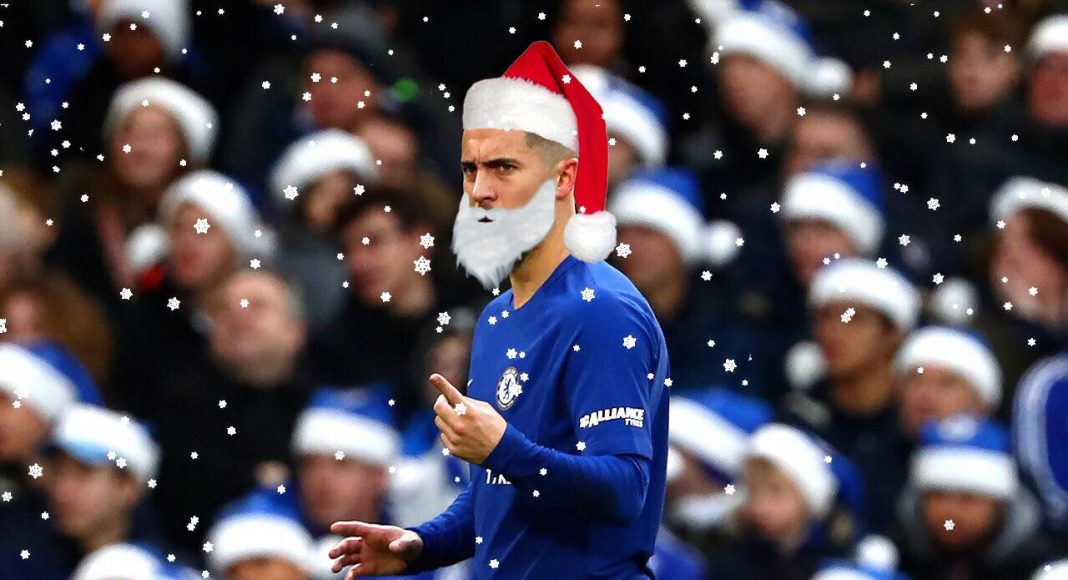 On Halloween, TalkChelsea created a starting XI of Chelsea players, past and present, and adapted their names in line with the occasion. N’Ghosto Kante and Frankenstein Lampard held the midfield, with Demba Boo leading the frontline alongside Die-ghoul Costa.

As much as we would love to take credit for all of these  incredible puns, we cannot. We tweeted out on the day asking our followers for suggestions on who we could include in this unique side, and we were flooded with suggestions.

Now, ’tis the season to be jolly, so we thought we’d spread some Christmas cheer with another side, this time Christmas themed, and tweeted out once again to offer our readers to be featured in an article with their ideas.

The ideas that we came up with ourselves were  excellent again, providing us with the chance to replicate the success of our Halloween side. Here’s the team that we have created:

Asmir Bego-grinch – Look, this was a tough one, so we thought we’d start as we mean to continue with an absolutely shocking pun.

Davide Santacosta – Delivering presents onto the forehead of Alvaro Morata from the right-hand-side.

John Mistle-Terry – Anyone fancy a kiss?

William Gal-last christmas I gave you my heart – An absolute stroke of genius from the legendary Wham. Although the legacy of the song may well have been tainted with it’s inclusion in this dreadful article.

Ashley Coal – That’s likely all he found in his stocking after his split from Cheryl!

Frankincense Lampard – Along with gold and myrrh, one of the three gifts that we presented to baby Jesus. He’d probably have preferred an Action Man, to be honest.

Shaun White-Christmas-Phillips – It’s been a fair few years since we’ve had one of these in the UK.

The Coca Zola truck – This one might be a little niche, but if you live in England you probably know what we’re on about, and have proceeded to exit this article and report us to the relevant authorities. This might be the worst one of them all.

Pedro-ho, ho – Twitter user @NunesNxscimento  suggested this one. Blame him, not us.

Demba Bethlehem – The birth place of Jesus Christ himself, a man not even remotely comparable to former Blues hitman Demba Ba.

Here’s some of the ideas that our Twitter followers suggested, which are every bit as bad as our own:

DECO the HALLs with DOWs of holly

A special thanks to @JosephScotting for the part he played in the creation of this article.